Connectedness of the boundary

My question is about the following claim:

Without the assumption $\text{int}(\text{cl}(A)) = A$, the statement is false (just take any open set and remove an interior point). This condition is not necessary but I think it is sufficient to get the claim.

This seems a trivial matter, but I cant's find a proof using only basic topological tools. Does anyone know something about this ? Thank you very much.

I have thought some more about this question and managed to complete the proof (assuming I haven't made any mistakes of course; comments welcome). Because of this, I have decided to reorganize my answer. (Note that the comment at the end of andrzejczarnecki's answer is referring to an earlier version of my answer. I've kept the notation $f$ for the map he is referring to.)

First, a word or two about the topological tools used. I have tried to use only basic topological tools, as the question asks. As suggested in the motivation below (see the example with the torus), the facts that $\mathbb R^n$ is simply connected while $S^1$ isn't, seem to be crucial. To treat simple connectedness in a reasonable way, I have decided to use the fundamental group.

Let us consider some examples first. 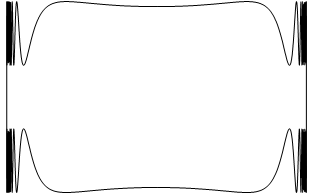 As we can see, both $A$ and $X\setminus A$ are path-connected, but $\partial A$ isn't (by the same argument as for the topologist's sine curve).

Since the torus has very similar topological properties to $\Bbb R^n$ but is not simply connected, this leads us to the idea that a proof in the $X = \Bbb R^n$ case will probably have to use simple connectedness. This motivates the proof that follows.

The "only if" follows from $\mathbb{R}^n$ being normal.

As for the "if", consider that $\partial A$ has two components, $X$ and $Y$. Neither of them can lie in the interior of closure of $A$ (it is then a clopen set in the complement of $A$, and we assumed it to be connected). So assume to the contrary, and this actually means that both $X$ and $Y$ have points from the closure of interior of complement of $A$ (don't worry, that was the longest:), say $x$ and $y$. Now you can connect $x$ to $y$ by a curve through $A$ (we can do such things in $\mathbb{R}^n$), and then connect $y$ to $x$ with a curve through the complement of $A$ (we need that nonempty interior of complement for that). This gives a loop that cannot be homotoped to constant, yet $\mathbb{R}^n$ is simply connected, a contradiction.

This cannot be done non-homotopically. The equivalence as I stated it characterises (is equivalent) to the ambient space having trivial first cohomology. The map $f$ from Deian Govc's answer cannot exist precisely because it would give a nontrivial cohomology class.

Not the answer you're looking for? Browse other questions tagged general-topology connectedness or ask your own question.

2
Compactness and connectedness of the topological space?
5
Is the boundary of a boundary a subset of the boundary?
3
Bounded components of complement of bounded planar domain are simply-connected
0
Is the function constant given these constraints2
1
Is it possible that there is a connected topological space without path-connected subspace?
0
Determine the interior, closure and boundary of a set under usual topology