We can describe the valid numbers with a FSA using the digits as alphabet (the upper bound on the number is not yet included): 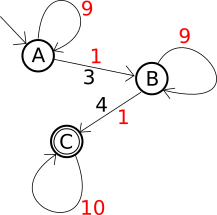 Here the black numbers at the arrows denote the symbol used for the transition. If there is no such number every symbol that isn't used with another transition is valid. The red numbers denote the number of symbols that that result in the given target state.

We can represent this as a graph with the following adjacency matrix (weighted with number of symbols that can be used for each transition):

Note that any path in this graph starting at vertex 1 corresponds to a number and every path also ending at vertex 3 is one of the numbers we want to count.

Now we count the "other" good strings. There are $9$ times as many as there are good strings that begin with $0$, which is the same as the number of $3$-digit good strings.

Let $a_n$ denote the number of strings of $n$ digits that contain at least one $3$ somewhere to the left of at least one $4$. You want to calculate $a_4$.

Here is my non-math answer: 523. I wonder if breaking the answer out into 6 cases yields duplicates. i.e. the same number could be counted in more than one case.

As David shows, the formula for this with $d$ digits is

Adding the two together gives us all numbers where $3$ is not before $4$, and since there are $10^d$ digits, the answer above is shown to be correct.

The output of this program is: