Is a point in or out of an irregular pollygon?

I have a list of N points which are the corners of an irregular, non-intersecting polygon in clockwise order.

For any other point, is it inside or outside the polygon?

Is there an algorithm for this?

If there are self-intersections, the algorithm doesn't collapse; it simply gives figures like below (that may remind of Matisse...): the blue colored regions represent the set of points that are considered as "inside" the polygonal shape (of course, one shouldn't any more distinguish an "inside" and an "outside".

The fact that a region is filled is linked to the parity of the winding number. Let me explain it plainly.

Let us take, in the plane assimilated to the complex plane, a reference point $z_0$. Let us consider the function $w(z)=arg(z-z_0)/(2 \pi)$. When $z$ follows the (closed) contour, the difference of values of $w$ between the beginning and the end of the contour is the (signed) number of times the contour has "turned around" point $z_0$. Colored regions are those with an odd winding number. 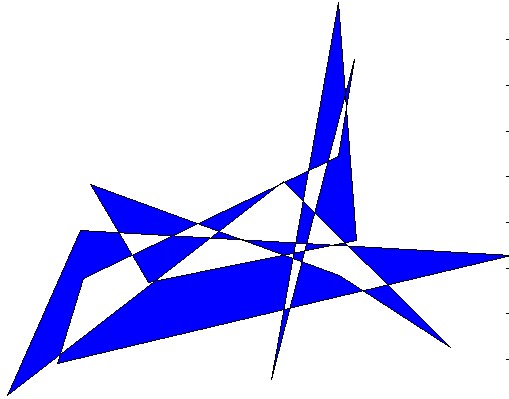