Game, stealing edges in a graph.

I was inventing a problem for a math contest, I was really pleased with it, but then I found a mistake in my solution and have not been able to solve it. It is as follows:

Alice and Bob play a game. Let $n$ be a fixed positive integer. Alice selects a connected simple graph on $n$ vertices. After this Alice and Bob take turns selecting a vertex with at least $1$ adjacent edge and removing all the edges adjacent to it. Bob starts. For which values of $n$ does Bob always have a strategy that allows him to take strictly more edges than Alice?

Bob can always take the graph with the highest degree every turn. For a graph to be able to resist this strategy it must have at least two vertices with the highest possible degree which are non-adjacent; the graph must also have an even number of edges.

This is the graph for $n = 11$. For greater odd $n$, add pairs of vertices that are connected only to J and K (and not each other). 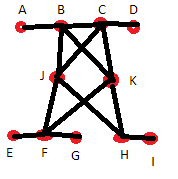 This was inspired by using the same graph on just the vertices ABCDEFGHI (which is not connected, so not a solution itself). On this reduced graph, it is easier to see that $B(\cdot) = 0$. There are three moves (B, C, F) that give two edges, but moves B and C are mutually exclusive (in terms of giving two edges).

J and K are added to make the graph connected. Alice can still break even because if Bob plays J or K, Alice can respond by taking the other of J, K (since these will always be equivalent moves), otherwise, Alice can pretend the graph is the reduced one. (A bit of care has to be taken because because the addition of J and K can cause adjacent vertices to last longer than they would in the reduced graph, but the graph is designed so that moves that would cause this to happen are bad moves.)

Alice's strategy on 13 or more vertices is the same, but if Bob takes one of the new vertices, Alice can respond by doing the same.

(I have attempted to computer-verify that this graph works for small values of $n$, and assuming my computer code is correct, the verification succeeds.)

For $n=7$, I found this graph via computer search:

I found this graph more difficult to generalize than my $n=11$ example, but I did extend it to a graph with $n=9$ which appears to work: 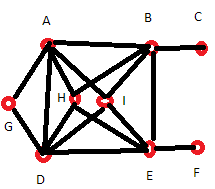 Following are some additional comments on the problem which OP has probably already noticed, but I think are worth mentioning:

Not the answer you're looking for? Browse other questions tagged combinatorics graph-theory combinatorial-game-theory or ask your own question.