While I like working with matematics inside LaTeX (that is to say, scribble notes e.t.c. even for things I know I will never want typeset), I often find myself resorting to pen and paper for the simple reason that I find it more convenient (being able to shuffle papers around, write some additional notes to the proof of a theorem on one paper so as to remember some detail for whenever I want to sue that particular theorem).

I realise that I probably won't be able to totally move away from using pen and paper (using TikZ to fiddle around with commutative diagrams in "real time" seems like rather a nightmare), but I would like to avoid the huge stack (read mess) of unorganised palimpsests I have to wade through every time I'm looking for some note/theorem/definition.

I'm thus wondering if anyone is aware of some form of software for organising "mathematical thought" (for lack of a less cheesy word); somewhere between a full fledged theorem prover (Coq, Agda e.t.c.) and a typesetting system (LaTeX).

Relevant features would be some form of mathematical "awareness" (maybe something like a a browser for some mathematics RDF schema?), searching (for symbols, texts e.t.c.) and version control (in case of plain text files this could just be achieved by using a regular version control system, but it would be nice if it was more aware of the contents).

Thanks in advance for any hints or suggestions.

EDIT: I just realised that I might just want org-mode. I haven't used it for anything beyond creating basic outlines, is anyone using it for something like what I'm describing above?

EDIT2: Before anyone suggests it, a wiki is not quite what I want, unless you can set it up without starting a server and it's very easy to organise things into seperate small projects (if the threshold of using it isn't minimal I can't see myself using it over grabbing a piece of paper near me).

Tilo has probably got a solution now but for others.....

Windows-based outliner software like SEO note and TreePad are excellent programs to collect disparate and unorganized information into one document. There is a tree structure you can create to organize and navigate your stuff.

You can create hyper links to documents (maple files, spreadsheets, pdf math books, scanned images, etc) on your hard disk or webpages on the net.

HyperLinks to start external programs (for typesetting or theorem provers in Tilo's case) is very easy to setup as well.

You can copy/paste scanned images of your handwritten notes into the outliner document and add some keyword text so that these notes can be located through the search function.

There are many helpful features but some features and functionality that would make these programs even better would be text folding, direct image scanning into the document, graphics tablet support, revision history, LaTex support and syntax highlighting. It's been a while since I looked into these programs. Perhaps some of this functionality exists in some outliners now. That Wikipedia link has a list.

What about TeXmacs? TeXmacs is a kind of mathematics processing application: it does word processing for mathematics with LaTeX quality and it can be interfaced with specialized mathematics tools for graphing, numeric and algebraic calculus. 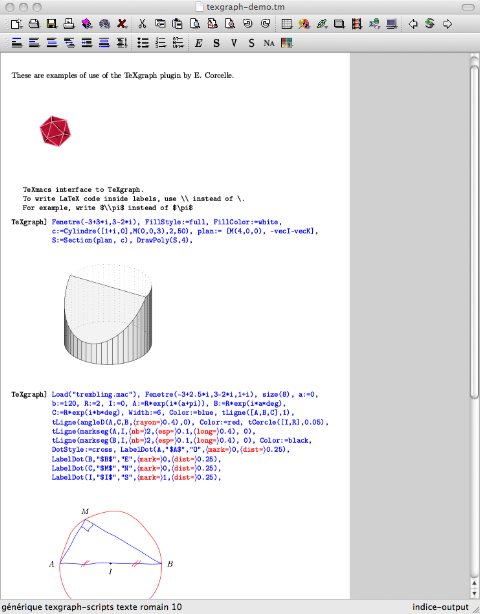 So you can write down mathematical notes (buffer) with source from own writing and third party computation or graphing. TeXmacs takes some inspiration from Emacs (integrated Scheme interpreter) but with a more mathematics appetence.

Bit late of an answer, but I thought I would try to help out anyone that finds this question. For a simple interface for managing mathematical work, you could try out Open Notebook, a graphical application for creating mathematical documents. The software allows the creation of mathematical expressions, as well as an interface for manipulating and transforming expressions while solving a problem. It also comes with basic facilities for creating Cartesian graphs and geometry diagrams. Currently the file format for saving documents is a simple XML format, which would work for checking into a version control system. This format however is not designed to be easily human readable, and may change in the future.

Disclosure, I am the developer of Open Notebook, feel free to leave any feedback or suggestions here.

Not the answer you're looking for? Browse other questions tagged math-software or ask your own question.

4
Finding a Function That Approaches Another Function
21
A program to draw simple geometry (points, lines, dotted lines etc.)
3
Switching from Mathematica to MATLAB: As a text editor?
2
Learning Calculus (and beyond) using mathematics software
6
How to properly use technology for back-of-the-envelope calculations?
0
Advanced Mathematics 3D Geometry software?
2
Graphing Software for Teaching