Problem on similar triangles in a weakened axiom system 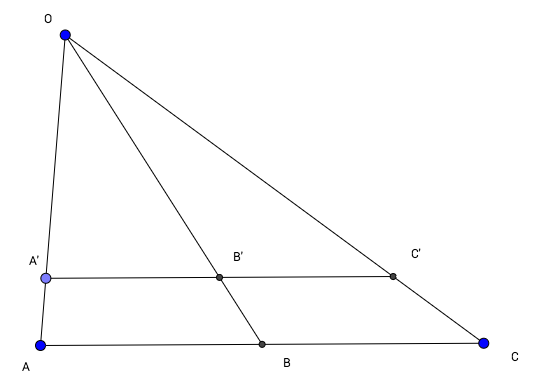 I would like to know how easily this can be proved without using the theory of ratio, similar triangles or area. Loosely speaking, what this means is that I don't want to use any theorems derived from considerations that involve products of lengths or irrational ratios of lengths.

I will state the problem more formally in terms of Hilbert's axiom system. I would like a proof relying only on the axioms of incidence, order and congruence, as well as the parallel axiom, but not using Archimedes' axiom and its consequences. I would also like the proof to be purely geometric. I add this requirement because I already know that it is possible, based on the stated axioms, to construct an ordered field $F$ such that the plane is isomorphic to $F^2$, and the problem then becomes trivial. But that construction is relatively involved, and what I would like is the most direct geometric proof possible.

I would prefer a proof not using any assumptions about the intersection of two circles or of a circle and a line, but a proof using these would be better than no proof.

Browse other questions tagged or ask your own question.

4
Proof of "triangles are similar iff corresponding angles are equal"
2
In Neutral Geometry, prove that the opposite sides of a rectangle are congruent.
7
How to state Pythagorean theorem in a neutral synthetic geometry?
3
Similar Triangles Problem (No corresponding sides)
4
Neutral geometry: If one triangle has angle-sum $180^\circ$, then all triangles have angle-sum $180^\circ$
2
Model of ordered plane with the negation of Pasch's axiom
6
Show that if two triangles built on parallel lines, with equal bases have the same perimeter only if they are congruent.
3
Congruence of angles axiom
1
Can one prove non-trivial congruences of triangles without SAS or other congruence axioms?