Here's a pencil-like robotic spaceship carrying an experiment, it is a solid mass 100m long, 100 inches thick and weighs 1000kg. We're in deep solar space 100au above the sun. 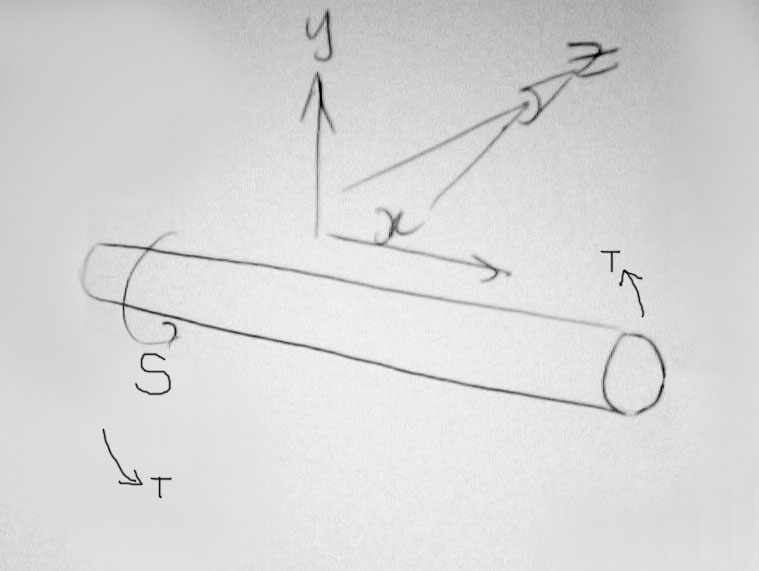 Assume we can apply any platonic torque to the object.

If the body is rotating around it's own long axis, we'll call that "spinning".

If the body is rotating only around the global Z axis, we'll call that "tumbling".

To be clear (i): if it is "tumbling", then the "spin" would not always be around the global X axis. "spin" is around the long axis of the object: that axis would change globally as the object moves in other ways.

To be clear (ii): what we describe as "tumbling" would take place only in the global YX plane, with no movement to-or-fro in the Z direction.

what we want the spacecraft to do is spin and tumble cleanly, at the same time.

To be clear: we want the want the angular momentum to be the sum of two items. A constant component along the global z axis. And a rotating component which is perpendicular to the z axis. (Indeed, along the body length for clarity.)

Of course ... that's absolutely impossible because of gyroscopic effects.

If you give it two naive torques to spin it, and, make it tumble, in fact there will always be a "wobble" in the third global axis (ie: seen from overhead it will rotate slightly back and fore in the y axis).

So - what torque would you have apply

to get it "spinning" and "tumbling" cleanly with no wobble in the Y axis?

I imagine the answer is something quite simple like "oh you must apply sin(time) torque here" or some other cohesive solution.

This would seem to be an everyday issue to engineers and the like, so I imagine there is some well-explored solution. But I couldn't find it.

It occurs to me that the formula to get the object to do the behaviour described, would have to, in fact, take in to account the current angular momentum of the object at any moment. Perhaps? It is very confusing to see how you would start the motion or describe maintaining said movement. Both problems - starting or maintaining - seem astoundingly difficult.

The torque is the time derivative of the angular momentum. If I understand correctly what you mean by "spinning and tumbling cleanly with no wobble", you want the angular momentum to be the sum of a constant component along the $z$ axis and a rotating component perpendicular to the $z$ axis, along the body axis. The time derivative of this sum is a vector perpendicular to both the $z$ axis and the body axis, which rotates in sync with the body. In your snapshot of the motion, it would point along the $y$ axis.

Not the answer you're looking for? Browse other questions tagged physics recreational-mathematics rotations tensors or ask your own question.

6
How can angular velocity or angular momentum be a vector?
5
How do I apply an angular velocity vector[3] to a unit quaternion orientation?
6
Aren't asteroids contradicting Euler's rotation theorem?
0
Angular momentum superposition
1
Rotate object around a fixed coordinate axis
2
Ellipsoid moment of inertia matrix
0
Calculating the distance in degrees between two points on a circle
1
Axes of rotation in 4D