Is there a geometrical interpretation of this equality $2\cdot 4\cdot 6\cdot\ldots\cdot(2n)=2^nn!$?

How it can be seen in a plane?

I have found many proofs with by induction but I wish to understand it geometrically.

I've actually been meaning to think about this exact question for a while, in a specific context:

I've always seen it listed that the size $\left| \operatorname{Sym}(Q_n)\right|$ of the symmetry group of $Q_n$ is $2^n \cdot n!$, and only recently did I learn this happens to be equal to the double factorial $(2n)!! = 2 \cdot 4 \cdot \ldots \cdot 2n$. But shamefully, I've never known why either should count symmetries of the cube! 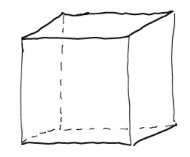 Now, the orbit-stabilizer theorem tells us that

where it's apparent that $V$ can get sent to any of the other $2^n$ vertices. But counting symmetries that fix $V$ can be a bit tricky. More pictures are in order.

On the left we see vertex $V$ in red, and some rotations implied by the green arrows. On the right, there's a hyperplane (implied in green) through which we can reflect, to obtain another symmetry.

But what the two pictures really have in common is the blue triangle: it's the key! To get the triangle, take the vertices vertices that are just one step away from $V$ and connect them (see also, vertex figure). A moment's thought should convince you of two things:

Now it remains to show that $\left| \operatorname{Sym}(Q_n)\right| = 2 \cdot 4 \cdot \ldots \cdot 2n = (2n)!!$. Our approach will appeal to the fact that the cube $Q_n$ is a regular polytope, which means that its symmetry group acts transitively on its set of flags.

A flag, you say, more terminology? Yes, but it's quite manageable. A flag is simply a nested set of faces of the cube, one for each dimension. For example, in the $3$-dimensional cube $Q_3$, a flag looks like

Now, the definition of regularity just says that we can move any such chain of nested faces to any other chain, using one of the symmetries of the cube.

Not the answer you're looking for? Browse other questions tagged combinatorics geometry factorial geometric-interpretation or ask your own question.

4
Dihedral groups: Relationship between symmetries and rigid motions
0
Symmetry of the tetrahedron as a subgroup of the cube