Proof of every finite group is finitely presented.

I'm reading the proof that every finite group is finitely presented from Dummit's Abstract Algebra, but there's a part that I don't understand. In the proof below, what are the elements $\tilde{g_i}$? I think they are the cosets $g_iN$, but how do we know that they generate $\tilde{G}$? And why does $|\tilde{G}|=|G|$ lead to $N=\ker \pi$? And finally, how do we get the sufficient condition (ii) in the final sentence?

I really do not understand these parts and I'd greatly appreciate any explanations.

I'll try to clarify the proof though you might have done it already (I was struggling with this theorem too so the answer could be useful for someone).

First of all, let's check that $N$ $\leq$ ker $\pi$. It is true since $N$ is the intersection of all normal subgroups containig $R_0$, and ker $\pi$ is one of such subgroups. Now we apply the following theorem. Let $h:A\rightarrow B$ be a homomorphism and $A$ $\rhd$ $X$ $\leq$ ker $h$, then for the projection $p:A\rightarrow A/X$ there is a unique homomorphism $f$ such that the following diagram commutes ($h=f\circ p$): 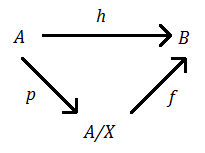 Let say that in our case there is a unique homomorphism $\phi$ such that the following diagram has to commute: 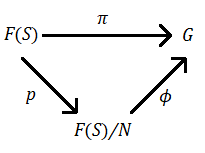 Not the answer you're looking for? Browse other questions tagged abstract-algebra group-theory finite-groups group-presentation or ask your own question.

0
Can every finite group be presented as an Fp group?