Number of ways of coloring projected faces of any hypercube

EDIT: This is the concrete problem in its current state:

How many ways are there of separating a figure consisting of $l$ layers of squares with connected vertices (as the one seen in Fig. 5, for which $l=4$) into faces, when one can only create faces between any four vertices along the edges? An attempt is shown in Fig. 6 for $l=3$. 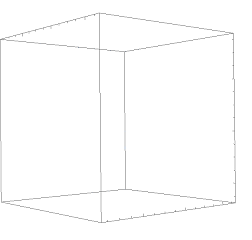 we can choose to see it as a normal person, 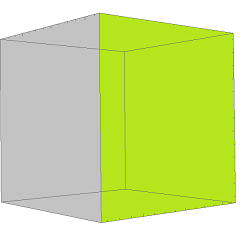 or we can choose to view it in a slightly more perverted way (so that the edge between green and orange faces is closest to the viewer): 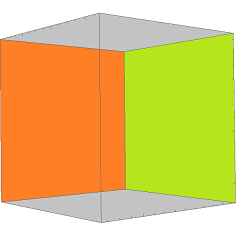 What is the general expression for $C_n$?

At first, when investigating the $4$-cube, I simply drew the projection of one seen at an angle and started constructing the combination tree (blue indicates that a branching choice was made to color that face - the ones in the same figure as the blue face are the ones that were determined as soon as the one in blue was chosen): 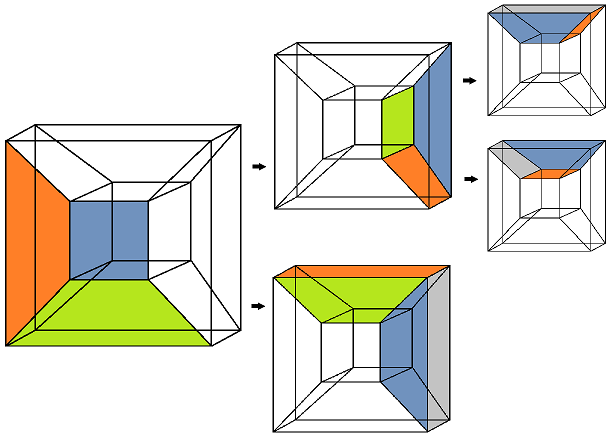 However, this was unsystematic and confusing, so I instead realized (hopefully this is true!)$^\dagger$ that I might as well represent it (and indeed any hypercube, by adding more layers) like this: 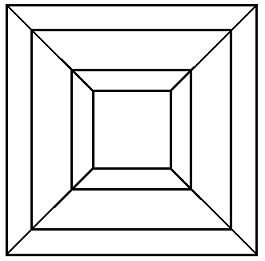 Let the edges of a square (as it is seen in Fig. 5) be one layer. There is then $1$ layer for a $2$-cube, $2$ for a $3$-cube, $4$ for a $4$-cube, and in general (since there are $2^n$ vertices in an $n$-cube and $4$ vertices in one layer) $2^{n-2}$ layers for an $n$-cube. The idea is now to find out how many new possibilities each layer introduces. Here are the possibilities for two and three layers (I've excluded the ones not unique under rotation and two adjacent faces with the same color is viewed as one face): 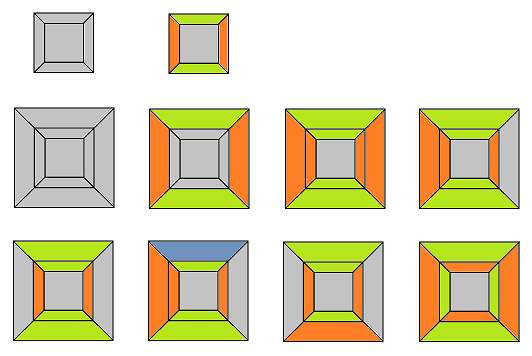 This is where I'm stuck: I'm having a hard time seeing the pattern in that there are two ways of having a total of two "split" faces in the three-layer case (fifth and sixth three-layer structure in Fig. 6), but only one way of having one, three or four split faces.
And even if I knew how to deal with this, the task still seems daunting.

Any help is much appreciated!

$^\dagger$ There may be introduced some extra symmetries when drawing the cube as the "inner" cube in Fig. 4, so that the same object will have less possibilities that are unique under rotation, than when seen as in Fig. 6.
This is an unfortunate choice in drawing style, but I believe that this discrepancy in possibilities (only one unique possibility of coloring the "inner" cube in Fig. 4) can be avoided if we draw the inner cube in Fig. 4 in two- or three-point perspective instead, so that "the front" surface is bigger than the "back" (or, which makes it count as two possibilities again, the other way around).

If that is not the case, however, it will surely be impossible to order all possible scenarios under continuous rotation of any hypercube so as to be able to account for this effect, so let's focus our attention on the problem as it is given from Fig. 6, and not worry about how to interpret the final result. Thanks to David K for pointing this out.

I think I figured it out!

Looking at a layout like the one in Fig. 5, we'll regard only one of the four sections, or "wings". Instead of counting the layers so that the central square is counted, let us count layers so that the first layer is the one just outside the central square. Then, for one layer there is only one possible configuration. For two layers there are two (two "single" faces or one "double" face). For three layers there are four, and so on. So for $l$ layers there are $2^{l-1}$ possible configurations of one wing. Disregarding any concerns of rotational symmetries, we can view the three other sides as independent of the first one. So all in all there are $2^{4(l-1)}$ configurations for all four wings.

I already figured out the relationship between layers and the dimension $n$, but there I counted the central face as a layer, so the new relationship is $$l=2^{n-2}-1$$ which is inserted into the newly found formula for number of possible configurations:

The function explodes after the first two:

Here's a logplot of the beast: 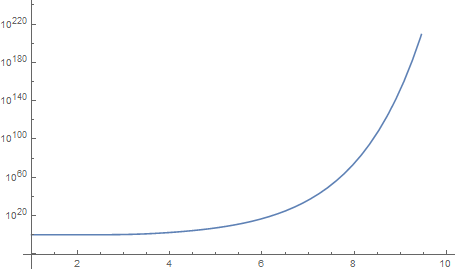 And here we see that the number of digits in $P(n)$ is growing exponentially (with $n$ again on the first axis): 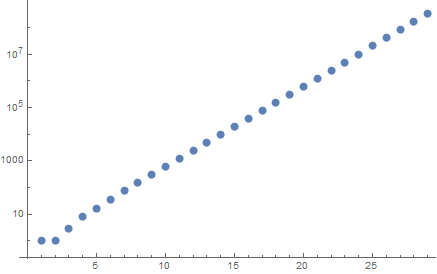 Not the answer you're looking for? Browse other questions tagged combinatorics graph-theory projective-geometry or ask your own question.

1
Vertices of Cube coloured with black or white colour