I have the following Hypotheis testing problem.

The statement of the exercise is:

Experiment: Eleven different varieties of barley were considered. Of each variety, half was kiln-dried and the other half was left untreated. Then the two batches of seed were sown in adjacent plots. The experimenter observed that kiln-dried seeds gave, on average, the larger yield of kernels and straw but the quality was generally inferior. The data set “KilnDriedBarley.txt” contains data on the year of the planting, and the value of the crop (in shillings per acre) for both kiln-dried and non-kiln-dried seeds. Seeds sown on adjacent plots are listed in the same row of the file.

(i) “Does kiln-drying barley seeds increase the average value of the crop?” Should we use an independent sample or a paired sample test to answer this question? Defend your choice.

My answer: For this experiment we need to use t test paried sample, because it is assumed that each of the eleven types of seed will have the same condition to growth execect the parameter we want to study, in this case is kiln-dried seed and non-klin dried seeds.

(ii) Use SPSS to create an appropriate graphical display of your data. Your graph should show how the kiln-drying affects crop value. Describe what you can see in the graph.

I need help in this part, because I have no idea how to display my data in SPSS showing my data and the test.

Part (iii) Conduct a statistical hypothesis test for the question in (i) at significance level $\alpha = 0.05.$ Include relevant SPSS output. Formulate a conclusion for the test and cite the appropriate p-value.

This is my output:

My answer: The P-value is .602. We have not enough evidence to reject $H_0$ in favor of $H_a.$ Therefore there isn’t any significance differences between the average value of the crop with kiln-drying barley seeds at a significance level of ($\alpha=5\%$).

1) Are my assumption, and conclusion correct for this experiment? I notice also that both samples has very similar sample std. therefore I assumed homoscedastic (anyway is computed by SPSS).

2) The second problem I have is that I want to use spss, but I can't find an option to graph the t test. (I belive is that what the question ii asked for).

You are correct that this is a paired model and that (assuming nearly normal data) you can use a paired t test to judge whether the population mean differences (between kiln dried and non-kiln) are consistent with 0 ($H_0$) or not ($H_a$).

Using SPSS, you have found no significant difference between kiln dried and not (P-value 0.6). In addition a 95% CI for the population difference $\delta = \mu_n - \mu_k$ includes 0, indicating that the data are consistent with no difference.

I repeated the test using Minitab. (I do not have ready access to SPSS.) Here is the output:

Lacking access to SPSS, I cannot show you how to use SPSS to make an appropriate graph, but I can tell you what I think the author of the question is looking for.

First, you should find the eleven differences. They are:

[Note: A paired t test is equivalent to a one-sample t test on the differences (testing the null hypothesis of null difference against the two-sided alternative). Because of the paired nature of the data it would be inappropriate to do a two-sample t test. (Kiln dried and Not are $correlated$, not independent.) Accordingly, it would be inappropriate to compare two separate plots for Kiln dried and Not.]

Then you can make a dotplot (stripchart), boxplot, or histogram of the differences. Look in the SPSS menus to find out what kinds of graphs are available. A Minitab dotplot in typewriter text format is shown below:

Plots below show a boxplot and a histogram. Each statistical package has its own style of plots, so your plots in SPSS may look a little different, but none of them should give a visual impression that the mean difference is significantly different from 0. In my opinion, eleven is getting near the lower limit of the sample size for which a boxplot is an effective graphical display, and perhaps eleven really is too small for a nice histogram. So I would prefer something like Minitab's 'dotplot' or a 'stripchart' from R shown last. These graphical displays show the locations of each individual difference. 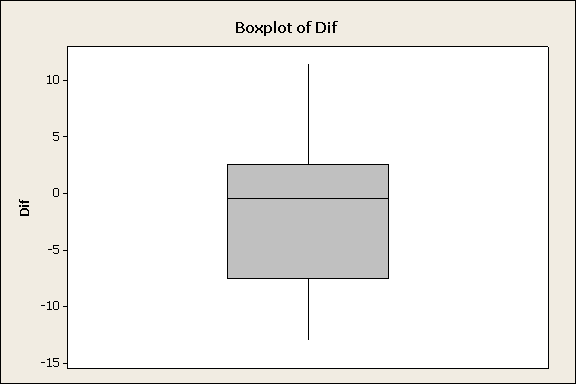 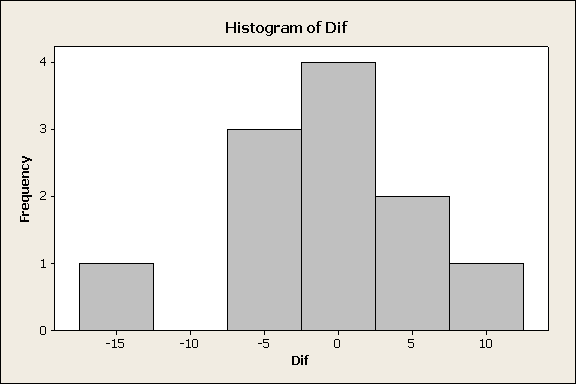 Not the answer you're looking for? Browse other questions tagged statistics statistical-inference or ask your own question.