What's the equation for a rectircle? (Perfect rounded-corner rectangle without stretching on only one dim)

You can make the radii smaller by increasing (over the even integers) the exponents in the equation.

You do get a more typical rectangular shape: naively rectangularized squircle

So I'm wondering how you'd modify the squircle equation to get flat tops, flat sides, except circles on the corners - not circles stretched on one dimension.

What I've tried: adding terms to the equation and looking at the produced image on Wolfram alpha.

Any idea how to make a perfect rounded rectangle with an equation? 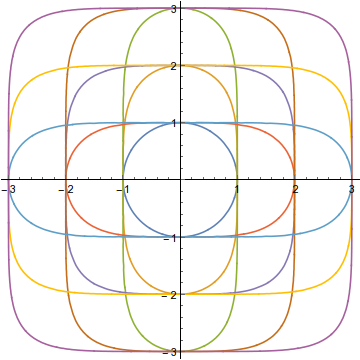 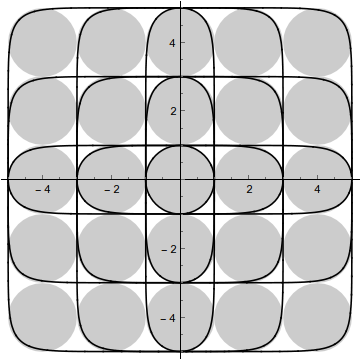 This is a very interesting question, and the answer to it comes from a simple observation of the following figure. If I am thinking correctly, the correct equation to your wanted rectangle is not unique, because it can be made more accurate by better constants. However for a rough idea, just try to think of this.

The shape of the curve x^2+y^2=1, it is a circle, centred at origin, of radius 1. Basically what we have here is an idea of a metric or a distance function ||A,B|| as the distance between two points A and B, and on one dimension we simply define it as |a-b| where a and b are the coordinates of A and B on the real line.

So similarly we can define the equation of a circle as (x^2+y^2)^1/2=|1|, and note that this also gives the shape of the circle only. Now we look at the equation (x^4+y^4)^1/4=|1|. Obviously such a curve would be symmetrical about x axis as well as y axis. Now we observe that such a curve passes through points on the axis as marked in the figure. Also it should be in the region of the green dot, or in the region of the red dot. 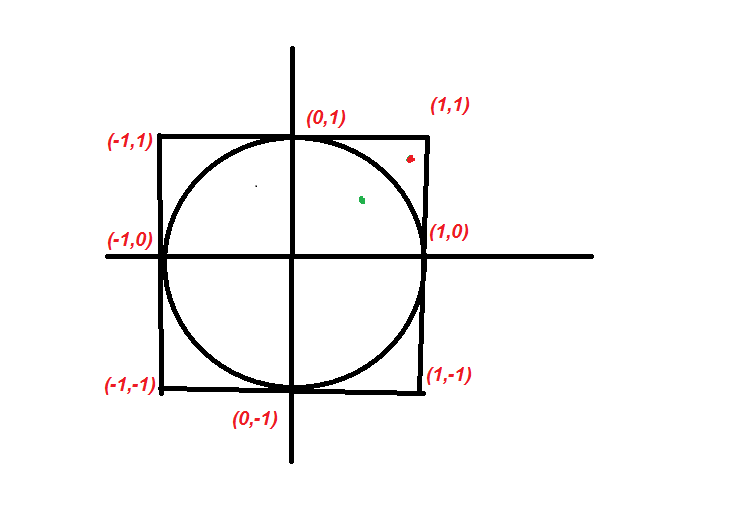 In short as we increase n in (x^n+y^n)^1/n=1 where n is an integer, the curve bulges out from the form of the circle towards the square. And as you can expect as you increase n large enough, the curve will approach the shape of the square. Now for any n, large enough you can adjust the curvature of the edges as much as you want.

However I have only exemplified for a square and it can be modified by taking an ellipse with major axes a and b, and a rectangle of the length a and width b. In that case, x-> x/a and y->y/b will give the similar result. In fact you can even get a rounded rectangle as pointed out by yourself, in the comments but this is also a way in which you can get it. Hope you got it.

This is all visually based so no proof here. But currently I have, given approximate corner radius $r$ and width $w$, height $h$, let $\alpha = w/2$, $\beta = h/2$, the the equation for a nice-enough looking rounded-corner rectangle, aka a rectircle, is:

The $\alpha, \beta$ in the exponent seems to get rid of the stretching I was talking about.

And with half that approximate corner radius: rectircle 2

Not the answer you're looking for?Browse other questions tagged algebra-precalculus geometry math-software or ask your own question.

0
Calculating the distance from top left corner to bottom right corner on a rectangle
4
Prove the equation without solving for X
0
one and only one double root(quartic equation)
12
How can the centers of these 5 related circles be specified as a formula?
1
Do perfect square trinomials only have one root?
5
What's the equation for a line segment?
0
Equation for the area of a rounded ends rectangle
0
Drawing a paraboloid with a rounded rectangle cross-section
8
Can you accurately check if a supposedly “circular” object is, in fact, circular only by measuring distances between points on its circumference?