Here is the picture of the page of the book, I am reading: 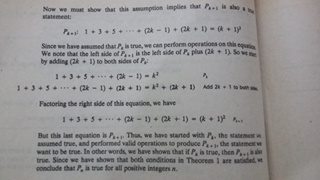 In the top line there is written that we have to show that 'the assumption $P_k$ is true implies $P_{k+1}$ is true'.

And what I think is that: as long as we know that the state of a proposition being true for any positive integer $k$ after Base number implies that proposition is true for integer $k+1$, we have to show that $P_k$ is true. However I don't have an idea yet how to show the truth of $P_k$.

So, my first question is that who is right? My book or me? And if I am right then how can I show the truth of $P_k$?

2) This may be taken as the second question but it is also bit annoying.

In the second paragraph it is written, "Since we have assumed that $P_k$ is true, we can perform operations on it".

Why is it necessary for an equation to be true for performing operations on it? Well, this is not much annoying as compared to the first question because whole the induction theory depends upon that.

Induction is, intuitively, an outline of an infinite proof.

Because if you prove that and since you said it is true for base number, the proposition is automatically proved true for every $n \in S$.

Let us see how!

Improvement (Edit): Just as you do in case of domino effect. Suppose it is reported that the cornered domino has been pushed over. And then you find out that dominoes are arranged such that whenever $k^{th}$ domino falls, $(k+1)^{th}$ falls. You would at once say that all dominoes must fall.

Remember that these two conditions of induction theorem simultaneously imply that a certain proposition is true.

i) It is true for base number

Note that based on the proof of base case and the proof that if $P_k$ is true we show that $P_{k+1}$ is true. Example: you prove that some claim is correct for $n=1$, then you assume it is correct for some n=k. Now you prove for n=k+1.

That is how we use induction - you don't prove that $P_k$ is true, you assume it it true - that is a big difference.

If my explanation is not coherent enough, you might want to google "Induction" and read a little more.

Proving this statement without induction is not that simple. You can do it like this. Suppose $n\in \mathbb{N}$, then we can look at the sum and rearange that:

So let's conclude, we can use induction here but we can go without it too. The first though is much simpler because it uses the induction and if you get your head around it, it's easier to verify that it is true. The other one is using induction internally for the rearanging and you have to think alot if this is true or if I made a mistake.

What does the operation part mean?

The example where this is generalized is the "principle of the good set" (this is the german name translated directly), it's used in measure theory and works with sets that are way bigger then $\mathbb{N}$ in fact with sets that have the cardinality of $\mathbb{R}$. And it works as follows. A $\sigma$-Algebra $\mathcal{A}$ of a set $\Omega$ fullfills the following axioms:

I hope I didn't confuse you too much. But I am certain that after some time you will accept inductions and learn how to use them. And if you once return here or have to explain it to somebody else, after using it a lot of times. You will fully understand it. People often find induction counter-intuitiv, I have some ideas why but I think that would really go to far. So my hint, accept it first, use it, try to explain it und you will have understood this and similar shemes.

Intuitively you can view this as a chain reaction, because once you show that $\color{green}{P_0}$ is true, then by applying $\color{blue}{P_k \Rightarrow P_{k+1}}$ repeatedly you can reach any number $n \geq 0$ and see that $P_n$ is indeed true.

At no point are you directly proving that $P_1$, $P_2$, $\dots$ are true, instead they follow from base case and induction step.

The part about assuming $P_k$ is an application of basic rules of propositional logic.

Suppose you have a proposition of the form $A \implies B$. One way you might be able to prove this proposition is by using the rule for Introduction of an Implication:

Of course this works only if you are able to come up with a proof of $B$ in the context of Step 2. But while you are in that context, you already know $A$ is true, and you do not have to prove it.

Once you have proven $A \implies B$, if you later find out that $A$ actually is true (not just assumed to be true in the limited context of Step 2, above), you can apply a rule called Modus Ponens:

We prove $P_k \implies P_{k+1}$ for any possible value of $k$, using the rule for Introduction of an Implication.

The principle of induction merely summarizes this long, repetitive, boring process so that we can relatively quickly show $P_n$ for any given non-negative integer $n$. And since we can always do this no matter what non-negative value we choose for $n$, we conclude $P_n$ is true for all $n$.

By the way, I would write at least one of the sentences in the book a little differently. Instead of "perform operations on this equation" I would write "use algebraic manipulation of $P_k$ to prove that other equations are true". That is,

Since we have assumed that $P_k$ is true, we can use algebraic manipulation of $P_k$ to prove that other equations are true.

I hope this clears up one of the points of confusion.

There is another way of thinking of this.

Throw out the standard induction theorem, and replace it with this one:

Any nonempty set of natural numbers has a smallest element.

In the end, it's just a matter of notation. But you might find one form of induction more intuitive than the other. If you are going to use this method, you should note that we usually talk about $k$ and $k - 1$ instead of $k+1$ and $k$; I used the latter because it corresponds more obviously to standard induction.

"as long as we know that the state of a proposition being true for any positive integer k after Base number implies that proposition is true for integer k+1, we have to show that Pk is true. "

As for you second question....

"Why is it necessary for an equation to be true for performing operations on it?"

It isn't. You can perform operations on untrue equations. You just can't assume any of the results are true.

I can do that. But I can't get any meaningful results.

In a very abstract and philosophical way a proof by induction is a tiny bit like a proof by contradiction.

In both you assume a statement without proof and you reach a conclusion that would be true if your assumption were.

But in the proof by induction you verify a single confirmation: "2 is divisible by two. Therefore all even numbers are."

While in a proof by contradiction you contradict with a contradiction: "3 is not divisible by two. Therefore no odd numbers are."

Think about Peano system (see footnotes) for defining natural numbers. You take an initial number, which you call 1, and then you say:

With these axioms, you construct the whole set of natural numbers. You don't need to prove such elements exist in a deductive was as you think, but you must construct the proof and you have the building blocks for that (while in the deductive method, the path is the inverse).

So, the analogous of Peano system applies for the induction:

So, the way to think why you should assume $P(n)$ is true, is because: