Dictionaries and resources for translation of mathematical terminology

Nowadays English seems to be the most frequently used language in mathematics. (Although plenty of papers and books are published in other languages, e.g., Russian, French, German and Chinese.)

However, mathematics is taught many other languages and there are occasions when we need a translation of some technical term, which is well-known in English, to other language.

There is somewhat similar question devoted specifically to Russian language: What resources are there for learning Russian math terminology?

One of the reasons I am asking this is this question which appeared recently at meta. In fact, the OP suggests in one part of this question creating some a kind of mathematical dictionary here at MSE.

Some possibilities of finding the translations which I am aware of.

Moreover, in some cases, checking interwiki links at Wikipedia can be also helpful.

For German to English and vice versa: see Hyman's German-English Mathematics Dictionary. It is slightly dated, but good enough for translating that one result you can only find in a German paper from the 1950s.

There is a 6-page English–Swedish–Esperanto–French–German (!) mathematical dictionary (somewhat geared towards PDEs) compiled by Christer Kiselman:

The math department of Princeton has a list of German words online, seemingly for people who want to read German math papers. The umlauts are missing, though... :) 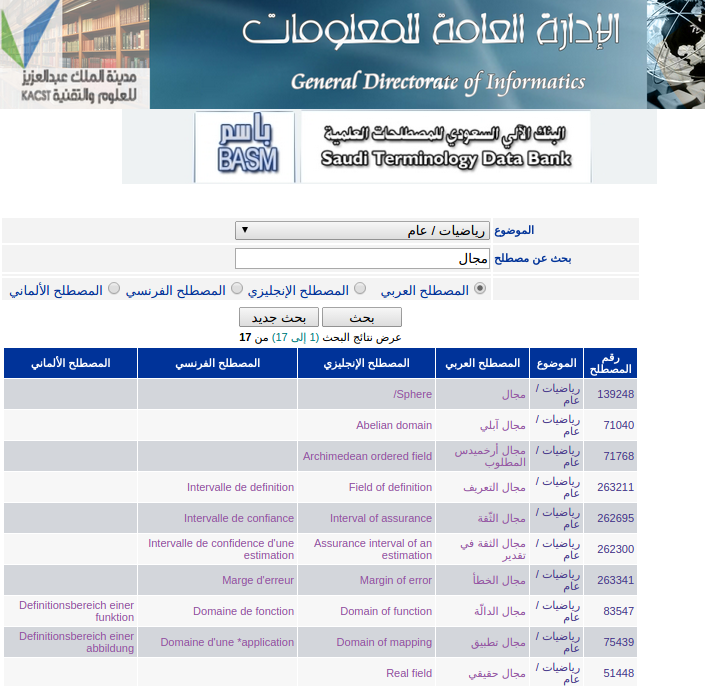 However arabic terms is somehow obscure even for arabs, every country make different translation.

I have found this online French-English/English-French dictionary of mathematical terms useful:

An interesting resource for English speakers seeking to read French papers, and which goes beyond a simple lexicon, is

French For Mathematicians: A linguistic approach

by Joël Bellache at Brandeis.

Not the answer you're looking for? Browse other questions tagged reference-request terminology reference-works or ask your own question.

31
Book/tutorial recommendations: acquiring math-oriented reading proficiency in German
26
What resources are there for learning Russian math terminology?
23
Is there such a thing as a mathematical thesaurus?

5
Problem books in different languages
10
Am I missing out by not knowing another language?
1
Translation suggestion of an operation - adding and subtracting the same term - German: Nullergänzung
2
"Modern analysis" books in languages other than English or Russian
0
Resources to Learn to Code for Math Research.
1
English translation of Riemann's complete works
7
Formalizing Natural Languages