This is probably a silly one, I've read in Wikipedia about power law and exponential decay. I really don't see any difference between them. For example, if I have a histogram or a plot that looks like the one in the Power law article, which is the same as the one for $e^{-x}$, how should I refer to it?

Also, notice that with the exponential probability distribution, you have the property of memorylessness.

How is a power law different from an exponential? (I'm putting this answer here mainly for my own future reference. Hopefully someone else may find it useful.)

Exponential function
(notice the exponent is a variable) $$ y = a^x $$

A power law is any polynomial relationship that exhibits the property of scale invariance.

One attribute of power laws is their scale invariance. Given a relation $f(x) = ax^k,$ scaling the argument $x$ by a constant factor $c$ causes only a proportionate scaling of the function itself. That is,

That is, scaling by a constant $c$ simply multiplies the original power-law relation by the constant $c^k.$

Thus, it follows that all power laws with a particular scaling exponent are equivalent up to constant factors, since each is simply a scaled version of the others. This behavior is what produces the linear relationship when logarithms are taken of both $f(x)$ and $x,$ and the straight-line on the log-log plot is often called the signature of a power law.

If you have a limited data set, one way to tell the difference is to put the data into spreadsheet software capable of exponential and power regressions and see which gives the better correlation coefficient. Presumably the coefficient is calculated by comparing the least squares errors of the semi-log and log-log plots. A bit more on that...

Determining which of these two plots is more line-like can tell whether exponential or power laws best model the original data.

If there is anybody landing on this from Nassim Nicholas Taleb's The Black Swan the issue at stake is how doubling a random variable affects the probability in power law distributions as opposed to a normal or Gaussian distribution.

In the case of continuous random variables, the pdf illustrates the difference:

A power law distribution has a pdf of the form

where $C$ is a constant, and $\alpha$ is the law's exponent.

This is in contrast to the rapid decay in the normal distribution, which in the standardized form has the following pdf:

Doubling the value of $x,$ amounts to raising to the third power the exponential (un-normalized) part of the pdf:

which can be visually plotted as: 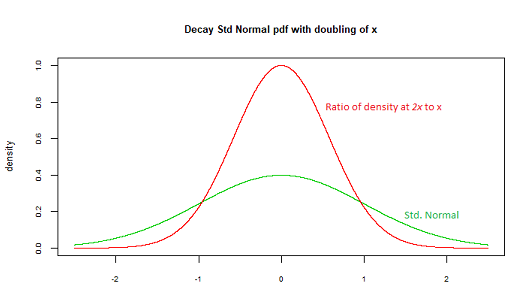 Therefore, at asymptotic values the relative probability between an extreme event and that of its value doubled will rapidly tend to zero, whereas in a power law it will remain stubbornly constant.

very different. A power law just says that some variable is a power of the other. For example, in physics

is a power law between $y$ and $x$ where the power is $2$ (the coefficient doesn't matter).

Exponential decay, on the other hand, is a similar idea, but formed around $Ce^{-kt}$ instead, for some constants $c$ and $k$.

The image in the wikipedia page on the power law is probably something like $\frac 1 x$, not an exponential decay curve.

Not the answer you're looking for? Browse other questions tagged probability-distributions exponential-function or ask your own question.