Isn't it true that if you are parameterizing a curve on a surface by something other than a constant multiple of arc length (for example, a curve $\mathbf{C}(x)=(x,y(x))$ in the parameter space of the hemisphere surface mapping $z=\sqrt{1-x^2-y^2}$), the critical point of $E(\mathbf{C})$ will not be a geodesic in general?

The minimum for the length functional is badly non-unique: it is given by any parametrization of the geodesic, not necessarily the natural one. On the other hand, the energy functional is locally uniformly convex; therefore the minimizer is unique and the variational calculus is nice.

Added: It is worth to mention that the "energy functional" is a Lagrangian action for a free particle confined to the surface. Therefore, the law of conservation of energy implies that any solution $\gamma(t)$ will move at constant speed (which is of course also possible to see directly). And if one restricts the the class of curves to such solutions, the EL equations indeed take the same form for both functionals.

Applying the E-L equation to the arc length functional yields

It is easy to show that $y=kx$ (a straight line through the origin, hence a great circle when mapped to the hemisphere) solves the second ODE (for the arc length functional) but not the first ODE (for the "energy" functional). The image below shows the incorrect solution for the "energy" functional ODE for the initial conditions ($y(0)=0$, $y'(0)=1$) in red and the correct solution in blue. 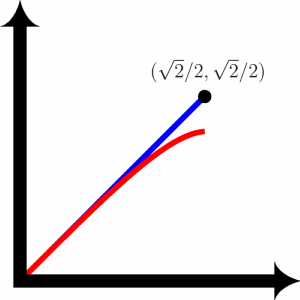 The projection of a great circle whose plane is not perpendicular to the $xy$-plane into the $xy$-plane is an ellipse. Hence, there should also be solutions to the ODE of the form $(a^2+1)x^2 + 2abxy + (b^2+1)y^2=1$ (the plane of the great circle is $z=ax+by$). It is easy to check that these ellipses are indeed solutions of (2) but not (1) using a computer algebra system.

The answer to the first question is that using $E(\gamma)$ instead of $L(\gamma)$ when parameterizing by arc length is indeed just a mathematical trick to simplify computation. In his book "Differential Geometry", Kreyszig derives the geodesic equation

(where dot denotes differentiation with respect to arc length) by applying the Euler-Lagrange equation to the arc length functional $L(\gamma)$ and then using the fact that the curve parameter is arc length to simplify the resulting equation. It is easy to show that applying the E-L equation to $E(\gamma)$ results in exactly the same equation (the geodesic equation) with a slightly less messy computation. Minimizing $E(\gamma)$ is valid because $ds / dt$ (the integrand of $L(\gamma)$) equals $(ds / dt)^2$ (the integrand of $E(\gamma)$) equals 1 when parameterizing by arc length.

There seems to be a silly, false, and unfortunately widespread belief that a geodesic must be parameterized by a constant multiple of arc length. The book "Elementary Differential Geometry" by Barrett O'Neill first published in 1966 may be a source of this belief. On page 245 of the revised 2nd edition, O'Neill defines a geodesic as a curve $\alpha:\mathbb{R}\rightarrow \mathbb{R}^3$ on a surface $M$ such that $\alpha''(t)$ is always orthogonal to the tangent plane of $M$ at $\alpha(t)$. He then goes on to "prove" that this means geodesics must have constant speed. The "proof" goes like this: $\frac{\operatorname{d}}{\operatorname{d}\!t} (|\alpha'|^2 = \alpha'\cdot\alpha') = 2\alpha'\cdot\alpha''=0$ ($\alpha'\cdot\alpha'' = 0$ since $\alpha'$ is orthogonal to the surface normal and $\alpha''$ is parallel to the surface normal). Hence $|\alpha'|^2$ (and the speed $|\alpha'|$) is constant.

The problem with this "proof" is that the correct definition of a geodesic curve on a surface (found on page 154 of Kreyszig's book) is a curve $\alpha$ such that the geodesic curvature $k_g$ vanishes at every point of the curve. Since $k_g$ is defined as $k\sin\gamma$ where $k$ is the curvature of the curve and $\gamma$ is the angle between $\ddot{\alpha}$ and the surface normal, $\ddot{\alpha}(s)$ is always parallel to the the surface normal of $M$ at $\alpha(s)$ whenever $\ddot{\alpha}(s)$ has non-zero length (dot denotes differentiation with respect to arc length and $s$ denotes arc length). If $\ddot{\alpha}$ has zero length, then $k$ must be zero and $k_g$ is also zero by definition.

The truth is that a geodesic is just a curve on a surface, and like all curves, it has infinitely many non-constant speed parameterizations. Let $\alpha:[0,L]\rightarrow\mathbb{R}^3$ (where $L$ is the length of the curve) be a geodesic curve on a surface $M$ parameterized by arc length. Let $\varphi:[0,1]\rightarrow [0,L]$ be any smooth, non-linear bijection. Then $\gamma = \alpha\circ \varphi$ is another way of representing exactly the same geodesic curve, but $|\gamma'| = |\alpha'|\varphi'$ is non-constant since $\varphi'$ is non-constant.