What is the difference between Riemann-integrable and Lebesgue-integrable? Does it have anything to do with the absolute value of the integrand; something like

The main difference between integrability in the sense of Lebesgue and Riemann is the way we measure 'the area under the curve'.

The following is taken from the wikipedia page for Lebesgue integration, and most instructive (Riemann in blue on the top, Lebesgue in red on the bottom): 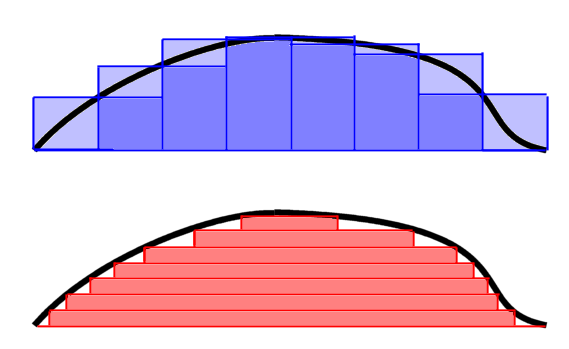 Or, another way to explain this:

I have to pay a certain sum, which I have collected in my pocket. I take the bills and coins out of my pocket and give them to the creditor in the order I find them until I have reached the total sum. This is the Riemann integral. But I can proceed differently. After I have taken all the money out of my pocket I order the bills and coins according to identical values and then I pay the several heaps one after the other to the creditor. This is my integral.

As a result of the different definitions, different classes of functions are integrable:

And, indeed, as basket noted, we can integrate a lot of functions in the Lebesgue sense which can't be integrated in the Riemann sense (e.g. the so-called Dirichlet function which is $1$ on the rational numbers and $0$ on the irrational ones). We even have the nice result that if $f$ is bounded and defined on a compact set and Riemann integrable, then it is Lebesgue integrable.

One can't really simplify things to the level that you apparently want. Simply the theory is somewhat complicated and there is no simple short answer to your question.

Since presumably you already know the definitions, let me comment on two aspects, which are essentially the most important, of course in MY opinion:

2) On the other hand, it is reasonable to argue that the most important property of Lebesgue-integration is that one can construct a complete space using (equivalence classes of) Lebesgue-integrable functions.

Not the answer you're looking for? Browse other questions tagged integration analysis or ask your own question.