In yesterday's Iowa Caucus, Hillary Clinton beat Bernie Sanders in six out of six tied counties by a coin-toss*. I believe we would have heard the uproar about it by now if this was somehow rigged in her favor, but I wanted to calculate the odds of this happening, assuming she really was that lucky, and assuming she rigged various numbers of the tosses.

* As many people have pointed out already, this turned out to be a selective data set - Sander's won just about as many coin tosses as Mrs. Clinton did. Read on if you still care about the problem.

But I vaguely remembered from reading about Bayesian inference that we can make a more educated statement about whether or not this was fair using Bayes' Theorem, and assuming various numbers of the coin tosses were rigged.

I tried it out myself, and here's what I came up with, but I'm fairly positive I worked this out incorrectly, so here's hoping you wonderful people can help. Here's my shot at it:

Here's a plot of the probabilities that the coin tosses were fair given an assumption of $n$ unfair coins: 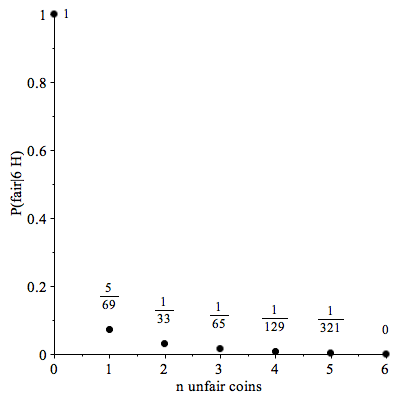 As I learned, the prior probability is arbitrarily chosen, and represents your belief/guess as to the likelihood that the coins were rigged. 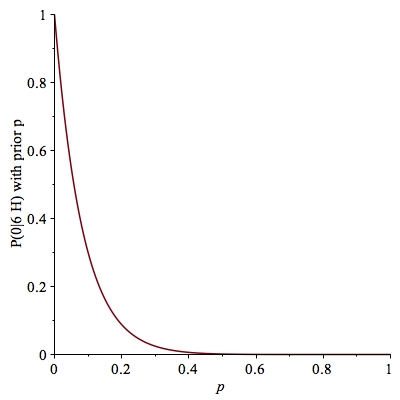 I may be going way off the reservation here, but if this graph represents values of $P(0|6H)$ for prior probabilities of having rigged coins, wouldn't the integral of this from $p=0$ to $1$ represent the total probability of 0 rigged coins, considering an outcome of 6 heads, with each prior $p$ weighted equally? Whether or not I'm abusing the maths, the integral evaluates to: $$ \int_{0}^{1} P(0|6H)(p) \ dp = 0.0822\dots $$

Note: I'm thinking in retrospect that the prior $p$ should probably be different for every $P(n)$ and assuming they're the same for each $P(n)$ is likely problematic, but I thought I'd share my process anyway.

I have absolutely no idea how one would go about even thinking about evaluating this integral - it seems as though there are a range of values for the integral anyway, depending on the choices of $p_n$. It seems it is definitely possible given specific choices for $p_n$ and maybe even a distribution for the $p_n$s, dependent on n, such that the distribution is still normalized, like a weighted decaying distribution or something (gets less likely as n increases that that number of coins was rigged).

Your computation doesn't make any sense. Assuming that $n$ of the tosses were rigged doesn't mean that you're assigning a prior probability of $n/6$ to "not fair". If you're saying the only possibilities are "fair" and "not fair" and "not fair" means a 100% of Clinton winning all $6$ tosses (which is what your computation of "$P(6H)$" implies), then that means either all the coins are rigged or none of them are, with $P(\text{not fair})$ being the prior probability that they are all rigged.

Not the answer you're looking for? Browse other questions tagged probability soft-question recreational-mathematics bayesian or ask your own question.

0
Is there a way to evaluate this integral? What are the bounds on its solution set?

0
Probability of tossing coins
1
Bayesian inference about a proportion (NFL playoffs and coin flips)
1
Using Bayes Theorem to calculate the probability of a coin being biased given a specific test result
0
Bayesian updating with fair and unfair coins.
1
Probability to pick up biased coin
0
coin toss and conditional probability