How can I bend a straight line? 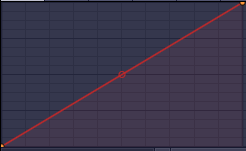 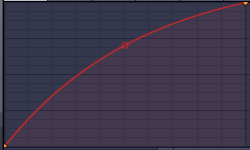 which part of my function do I need to change to get this? And once I've got it, what's the parameter to change the slope? Getting somethings more or less strong: 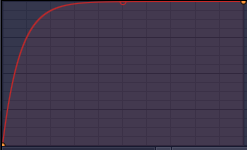 I hope the question is clear and feasible.

I would have a look at Bézier curves.

Here you can specify points the curve has to go through and some control points which influence the shape of the curve.

In general the problem of finding a curve that includes a set of given points (and possibly fulfills extra conditions like slopes or higher derivatives) is called interpolation.

Assuming that you're referring to a line sment, there are a lot of ways to do this. For the sake of further simplicity, just assume that we consider the function $f:[0,3] \to \mathbb{R}$ defined by $f(x)=0$.

Well intuitively you could refer to a parabola [or actually any polynomial] that just goes through $(0,0)$ and $(3,0$. For example, the parabola:

This of course is a kind of limited "bending," as it is symmetric. But you could similarly think about trigonometric functions of more general polynomials: $\sum_{n=1}^{\infty}a_{n}\cdot x^{n}$.

The most general method would have to be path homotopy between points, which requires a bit of work, but I will leave a link: homotopy

If you're not looking for a line segment, one could intuitively construct a decaying exponential function that is asymptotic to the axes, so that it appears like it is "bending."

Let me know if this is the kind of thing you had in mind.

I am not a mathematician, but a programmer, so please bear with my lack of scientificity. From time to time I need to "bend" an f(x) = x function.

These are the basic functions I use, maybe it helps someone else:

x can be any value between zero and xmax. 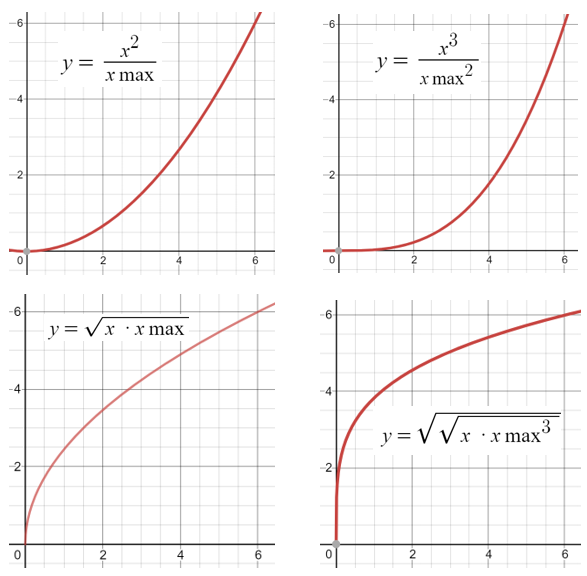 You can use this online tool optimize the functions to your needs: https://www.desmos.com/calculator

5
I need to define a family (one parameter) of monotonic curves
3
How to measure how erratic is a function between a and b
1
Definition of a function's domain and co-domain with subscript in name
16
How to explain the perpendicularity of two lines to a High School student?
0
mysterious in slope-intercept form of the equation of the line
0
How to make lowest part of this curve follow straight line instead sine wave?
0
Behavior of a linear regression when using a LogLog-Plot
0
Desmos help - making a finite length line with origin on a sine wave move along it and vary angle orthogonal to sine wave line
0
Parameterising 4PL graph for animation