Is negation introduction derivable in the natural deduction system of intuitionistic propositional logic?

If I have a natural deduction system for intuitionistic propositional logic, is it possible to derive the following rule?

My suspicion is that it isn't possible, because deriving the implication in the conclusion would require a use of the implication introduction rule, whose premise would have an expanded context $\Gamma, \phi$:

Since there are no rules whose premises have smaller contexts than their conclusion, there doesn't seem to be any way to derive $\Gamma, \phi \vdash \bot$ from the hypotheses. Of course, you could do it with a weakening rule, but that would only be admissible, not derivable.

Is the above reasoning correct? Or is there another approach that allows you to derive the rule?

EDIT: The rules of the natural deduction system I'm using are given below. 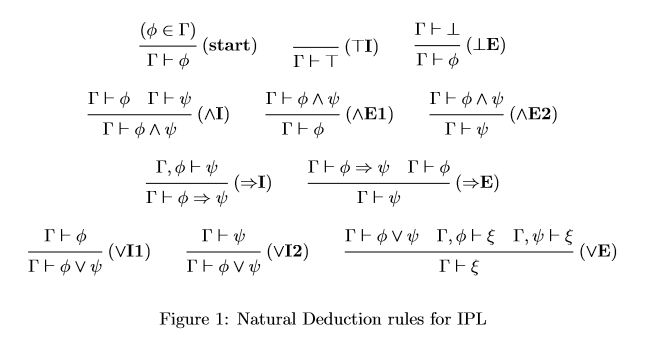 [Aside: your system is the same as the system NJ in Sorensen and Urzyczyn's Lectures on the Curry-Howard Isomorphism. The above proof schema corresponds to an application of the $S$-combinator $\lambda f\lambda g\lambda x(f x)(g x)$ to the proofs of the premisses of the rule.]

Not the answer you're looking for? Browse other questions tagged logic natural-deduction intuitionistic-logic or ask your own question.