Calculations with an exponentially-weighted moving average

I need help figuring out the following formula:

About the CTL they say:

CTL is calculated as an exponentially-weighted moving average of daily TSS values, with the default time constant set to 42 days. CTL can therefore be viewed as analogous to the positive effect of training on performance in the impulse-response model, i.e., the first integral term in Eq. 1, with the caveat that CTL is a relative indicator of changes in performance ability due to changes in fitness, not an absolute predictor (since the gain factor, ka (or k1), has been eliminated).

But I'm not sure what exactly will CTL_exp and CTL_start be in numbers and how will they change?

So I figured out that I can get the desired result like so:

But the question remains: I would like to know what is going on "behind the scene". So if anyone can explain, like Alfred Einstein sayd to a 6 year old, that would be much appreciated. Thank you.

As you correctly mentioned, Chronic Training Load (CTL) is an exponential moving average (EMA) of the daily Training Stress Score (TSS). Your TSS can vary a lot with time so you need to average it (for example, with EMA) in order to see the trend. The equation for CTL would look like this

Now let's generate some random TSS data (between 25 and 100) for 100 days and apply ExponentialMovingAverage[] to it. I have chosen low alpha for large smoothing of the data. High alpha will result in small smoothing. 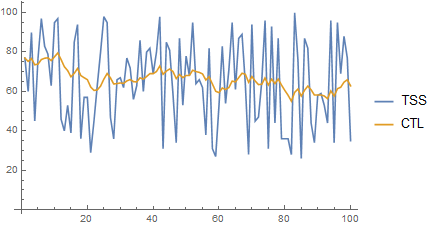 I'm not familiar with CTL yet but It looks like it works like compound interest or the Golden ratio? 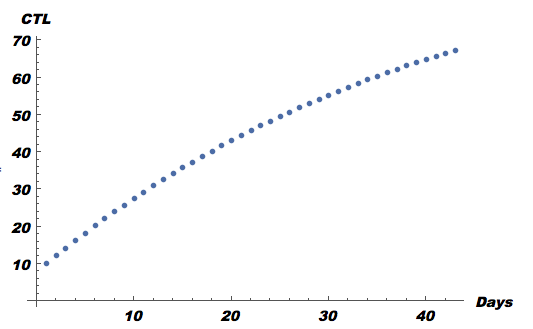 hope this is some use to you

Note: I just learned on Kahn academy that functions which take their previous output as their input: CTLday2 = CTLday1 + (100 - CTLday1)/42 are called "recursive functions". A famous example is Newton's Method. They usually produce a sequence in which element n+1 is generated from element n. We start with a base case. Every term is defined in terms of the term before it.

Sometimes an "explicit function" can be found which will give you any element you like if you know its index.

Not the answer you're looking for? Browse other questions tagged algebra-precalculus systems-of-equations or ask your own question.