Why is "the set of all sets" a paradox, in layman's terms?

I've heard of some other paradoxes involving sets (i.e., "the set of all sets that do not contain themselves") and I understand how paradoxes arise from them. But this one I do not understand.

Why is "the set of all sets" a paradox? It seems like it would be fine, to me. There is nothing paradoxical about a set containing itself.

Is it something that arises from the "rules of sets" that are involved in more rigorous set theory?

The set of all sets does not exist.

Just by itself the notion of a universal set is not paradoxical.

It becomes paradoxical when you add the assumption that whenever $\varphi(x)$ is a formula, and $A$ is a preexisting set, then $\{x\in A\mid \varphi(x)\}$ is a set as well.

This is known as bounded comprehension, or separation. The full notion of comprehension was shown to be inconsistent by Russell's paradox. But this version is not so strikingly paradoxical. It is part of many of the modern axiomatizations of set theory, which have yet to be shown inconsistent.

We can show that assuming separation holds, the proof of the Russell paradox really translates to the following thing: If $A$ is a set, then there is a subset of $A$ which is not an element of $A$.

In the presence of a universal set this leads to an outright contradiction, because this subset should be an element of the set of all sets, but it cannot be.

But we may choose to restrict the formulas which can be used in this schema of axioms. Namely, we can say "not every formula should define a subset!", and that's okay. Quine defined a set theory called New Foundations, in which we limit these formulas in a way which allows a universal set to exist. Making it consistent to have the set of all sets, if we agree to restrict other parts of our set theory.

The problem is that the restrictions given by Quine are much harder to work with naively and intuitively. So we prefer to keep the full bounded comprehension schema, in which case the set of all set cannot exist for the reasons above.

Not to mention that the Cantor paradox fails if we do not assume the power set axiom, namely it might be that not all sets have a power set. So if the universal set does not have a power set, there is no problem in terms of cardinality.

But again, we are taught from the start that these properties should hold for sets, and therefore they seem very natural to us. So the notion of a universal set is paradoxical for us, for that very reason. We are educated with a bias against universal sets. If you were taught that not all sets should have a power set, or that not all sub-collections of a set which are defined by a formula are sets themselves, then neither solution would be problematic. And maybe even you'd find it strange to think of a set theory without a universal set!

The existence of universal set is incompatible with the Zermelo–Fraenkel axioms of set theory. However, there are alternative set theories which admit a universal set. One such theory is Quine's New Foundations.

The "set of all sets" is not so much a paradox in itself as something that inevitably leads to a contradiction, namely the well-known (and referenced in the question) Russell's paradox.

So the non-existence of the "set of all sets" is a consequence of the fact that presuming it's existence would lead to the contradiction described by Russel's paradox.

This is in fact the origin of Russel's paradox.

In his work "The Basic Laws of Arithmetic", Gottlob Frege had taken as a postulate the existence of this "set of all sets". In a letter to Frege, Bertrand Russell essentially blew away the basis of Frege's entire work by describing the paradox and proving that this postulate could not be a part of a consistent set theory.

Russel's paradox arises if you consider the set $U=\left\{x:x\not\in x\right\}$. Ask yourself if $U\in U$. If you suppose so, then by the definition of unrestricted set comprehension $U\not\in U$. You have a contradiction, so it must be the opposite of what you supposed, that is, $U\not\in U$. But this is the same as saying $U$ belongs to the complement of itself, that is, $U\in U$. You now have another contradiction, but this is far worse, since you have no hypotheses. The whole theory is logically inconsistent.

In the first case, set comprehension says if you have a set $A$ you can have $\left\{x\in A:\phi\left(x\right)\right\}$ (notice: writing $\left\{x:\phi\left(x\right)\right\}$ is just wrong in this case, because you have to have an initial set). If you now define $U=\left\{x\in A:x\not\in x\right\}$ and you repeat the same passages as before, it only follows that $U\not\in A$. There's no contradiction and the theory is consistent.

In the second case, you consider classes, not just sets. Sets are classes that belong to some other class, while proper classes are classes that belong to no class. Set comprehension, in this case, says you can have $\left\{x:\phi\left(x\right)\right\}$, but all its members are sets by definition. If try to reproduce Russel's paradox, you get that $U\not\in U$. If you then suppose that $U$ is a set, then you have a contradiction, so $U$ must be a proper class. This is all you get. No contradictions. The theory is consistent.

Perhaps the following image will help take from here: 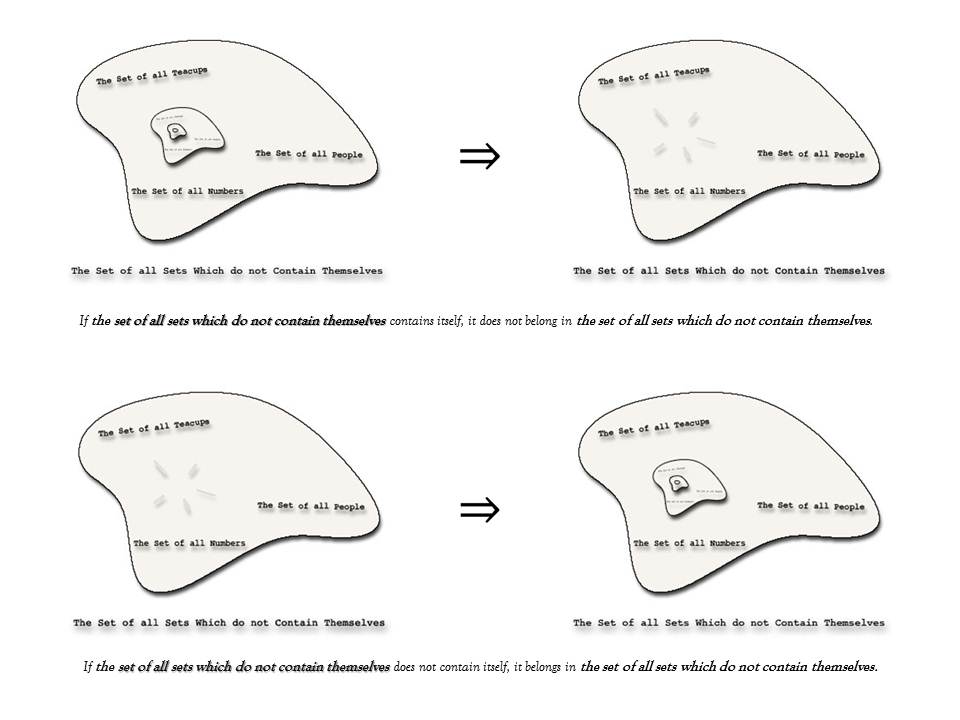 The set of all sets is not a paradox.

When set theory was invented, it was assumed that given any predicate, there was a set containing all the things that satisfied the predicate. This assumption is called naive comprehension. Unfortunately, this allowed paradoxes like the set of all sets not containing themselves.

So people invented restricted axioms of comprehension. These are rules that say that only certain predicates give rise to sets. There are different kinds of set theory with different comprehension restrictions.

One idea for limiting comprehension is to say that if the class of things satisfies the predicate is too big, the class is not a set. All the commonly used set theories use this idea. The set of all sets is very large indeed, so it is not a set in these theories.

There are other ways of restricting comprehension that get rid of the paradoxical sets but do allow a universal set. One such set theory was invented by Quine and called New Foundations. There is a book by Holmes, Set Theory with a Universal Set.

Some of the comments in the previous answers make a subtle mistake, and I think it may be worth clarifying some issues. I am assuming the standard sort of set theory in what follows.

The usual argument for Russell's paradox (also mentioned in some of the answers) proceeds by considering $A=\{a:a\notin a\}$. If $V$ is a set, $A$ would be a set as well (by comprehension, if you wish), and we reach a contradiction by noting that $A\in A$ if and only if $A\notin A$.

I think it is misleading to think (as some of the comments suggest) that the two proofs are (fundamentally) different. They are essentially the same.

This turns out to be the same as @donroby's answer. The scheme is inspired by the proof of Cantor's theorem, the use of which is implicit in the accepted answer.

As the following example shows, if all is construed as commonsense does, the set of all sets contains a member that simultaneously is and is not a member of itself.

Note: This answer dispenses with such higher notions as "power set," "cardinality" and "less than" whose properties cannot be ascertained before the properties of set are ascertained.

Further analysis leads to Type Theory which uses meaning as a guarding criterion. In Type Theory, all sets, as commonsense understands it, is meaningless; propositions like $T\in T$ and $T \notin T$ are also meaningless.

An informal explanation is Russel's Paradox. The wiki page is informative, here's the relevant quote:

Let us call a set "abnormal" if it is a member of itself, and "normal" otherwise. For example, take the set of all squares. That set is not itself a square, and therefore is not a member of the set of all squares. So it is "normal". On the other hand, if we take the complementary set that contains all non-squares, that set is itself not a square and so should be one of its own members. It is "abnormal".

"Why is "the set of all sets" a paradox? It seems like it would be fine, to me."

The lesson of this and other set theory paradoxes is that when you define a set in a proof, you are obliged to demonstrate that the set exists and is well-defined. To me, a paradox of Russell's Paradox is that he fell into this trap since he pretty much wore himself out trying to generate a rigorous foundation for Mathematics.

How about a set that contains everything with the exception of itself?

I think this paradoxon is not so complicated and can be explained simply.

In conclusion, everytime you put the new set into the set of all sets you create a new set. As a consequence, you can never build a set S(all) that contains all sets without creating a set which is not contained in S(all).

user237596user237596
1
$\endgroup$
5
Add a comment  |
Highly active question. Earn 10 reputation (not counting the association bonus) in order to answer this question. The reputation requirement helps protect this question from spam and non-answer activity.

Not the answer you're looking for? Browse other questions tagged paradoxes logic set-theory or ask your own question.