There is a rule in limits that when $x$ approaches zero: $$\frac{\sin\left(x\right)}{x}=1$$ So I used this rule on the following exercise:

Why am I getting this contradiction?

If you want to test yourself: Symbolab with the excersice preloaded

The first order terms cancel in nominator and denominator, so the contributions for the limit are in the third order terms. Replace $\sin(x)$ with $x-\frac16x^3+x^5r(x)$ to get the correct result.

There are circumstances where $\sin(x)-x$ cannot be neglected because it is amplified. For the sake of illustration, here is a plot of 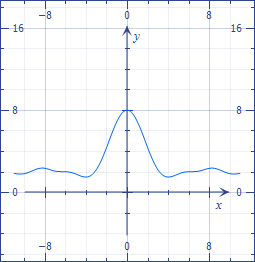 You can always replace a thing called $A$ by a thing called $B$ when you know that $A$ and $B$ are equal but if $A \neq B$ then you can't replace $A$ by $B$. Unfortunately people are so used to invalid replacements while calculating limits that they don't notice that it is wrong.

I'd like to address the last part of the question, which is understanding why the last pair of substitutions did not alter the limit, even though it was wrong to substitute $\sin x$ for $x$.

which is why it has the same limiting behavior as the original denominator: you multiplied the denominator by a quantity that converges to exactly $1$, which means you divided the entire expression by a quantity converging to $1$. The limit laws assure that such an operation does not affect the limit.

However, if you had made almost any other substitutions you would have gotten a significantly different result. In other words, it was just by chance that your random manipulation happened to not change the answer :).

When taking limits of an expression you cannot arbritraily replace parts of the expression in isolation. You need to calculate the limit of the entire expression.