Does the sum of exterior angles of a simple, convex polygon truly = 360°?

The question being asked of me is the following:

What is the sum of a polygon's exterior angles?

I'll use the following polygon as an example:

Using the equation for the sum of interior angles of an n-sided polygon, $(n-2)180$,

Granted, these answers have nothing to do with whether my definition of exterior angle is correct, but they're simply the answers I would get.

Also, for n=0, such as when the polygon is shrunk down to a point, as in the illustrations previously mentioned, the equation gives the expected 360°.

Well, the intuition that "exterior angle" captures is how much one would have to turn at each vertex if they were traversing the edge of the polygon. For instance, if you traverse a triangle counterclockwise and consider these angles, you get a picture like this: 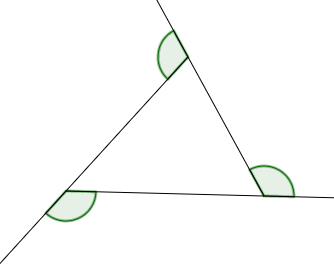 where all the edges are extended to rays in the counterclockwise direction, representing what happens if you don't turn at the vertex. It happens that this equals $180^{\circ}$ minus the interior angle.

This is to say that "exterior angle" is meant to capture a different intuition than the one you are pursuing - it isn't literally "the part of the angle which is exterior" so much as "an angle, which happens to be represented on the exterior." All the work you've done is consistent with your definition (and your definition would be a reasonable interpretation of the phrase "exterior angle" were it not defined otherwise)

Not the answer you're looking for? Browse other questions tagged geometry definition or ask your own question.

1
Why does a triangle have an interior angle of 180 degrees?