Does an injective endomorphism of a finitely-generated free R-module have nonzero determinant?

This math.SE question deals with the case that $R$ is a polynomial ring over a field. There it was observed that there is a straightforward proof when $R$ is an integral domain by passing to the fraction field.

In the general case I have neither a proof nor a counterexample. Here are three general observations about properties that a counterexample $M$ (trivial kernel but zero determinant) must satisfy. First, recall that the adjugate $\text{adj}(M)$ of a matrix $M$ is a matrix whose entries are integer polynomials in those of $M$ and which satisfies $$M \text{adj}(M) = \det(M).$$

where $\lambda$ is nilpotent, so $M$ is nilpotent and thus must have nontrivial kernel. So this settles the $3 \times 3$ case.

We may assume WLOG that $R$ is finitely-generated over $\mathbb{Z}$.

Yes, such an injective morphism has non-zero determinant.

Lam's Exercises in modules and rings includes the following: 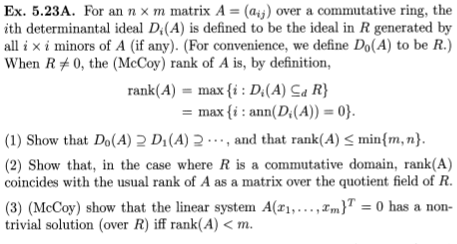 which tells us that your determinant is not a zero-divisor.

There is a pretty corollary there: a square matrix is a zero-divisor in the ring of matrices over a commmutative ring iff its determinant is a zero divisor.

The argument from Bourbaki referenced in Georges Elencwajg's answer is exactly the kind of argument I was hoping would work so let me record it here, with some simplifications.

Proposition: If $M$ is free then the converse holds.

Here is an elementary proof of the fact that if the determinant $D$ of an $n \times n$ matrix M is a zero-divisor, then there is a nonzero vector $X$ such that $MX = 0$.

Not the answer you're looking for? Browse other questions tagged linear-algebra commutative-algebra modules or ask your own question.