The following is a geometry problem that I came across with in the course of a research project.

Consider a ray starting at some initial point $t$. Place point $s_1$ at distance $r$ from $t$ on the ray and draw a circle centered at $s_1$ that passes through $t$. Likewise, centered at $t$, an arc with radius $r$ goes through $s_1$. Let $\mathcal{A_1}$ be the area enclosed between the intersecting arcs.

EDIT: The question has been edited in a way that makes the comments incomprehensible. Please see the edit history if you want to make sense of the comments.

EDIT: Here is the link to the same question at mathoverflow.net 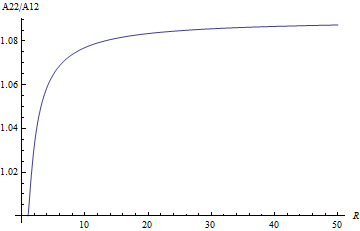 Edit: I have corrected a number of mistakes. Now, the area ratio is always greater than unity for $R>1$.

Not the answer you're looking for?Browse other questions tagged geometry curvature or ask your own question.