Then I show that $f$ is a bijection by showing that it is injective and surjective.

Remark: We can always solve this kind of question by picking a countable proper subset from (say) $(0,1)$ and then define a bijection $f$ so that the image of $f$ is a little bit bigger than its domain and then define a function which is equal to $f$ on the picked countable set and identity function outside that set.

Try something like the function in the following picture: 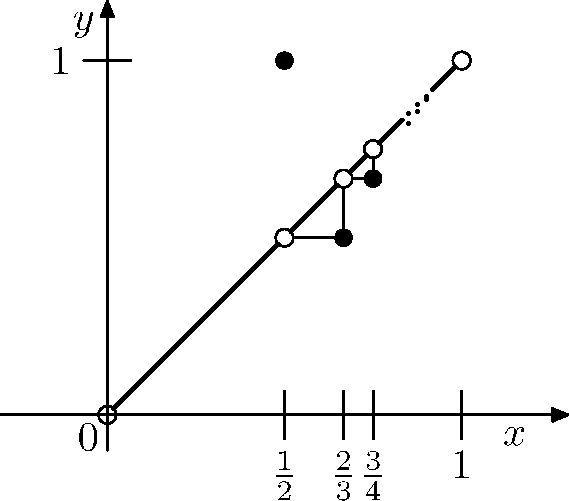 If you only have to show that such bijection exists, you can use Cantor-Bernstein theorem and $(0,1)\subseteq (0,1] \subseteq (0,2)$. See also open and closed intervals have the same cardinality at PlanetMath.

We will show that both sets are in bijection with $S^1\times \mathbb{Z}$.

This seems unnecessarily complicated, and I think you can just map both sets to $\mathbb{R}$ and circumvent the circle stuff, but this is how I figured it out.

I thought to supplement Did's answer with this picture that I sketched.

This is of course a bijection.

The technique here is to apply the (abstract) proof of the Schröder–Bernstein theorem to this situation.

Both of these mappings are injective, so we can use the proof technique to build a bijective mapping $h$ between $A$ and $B$.

If A is a countable infinite set and a is any element in A, then: there's a bijection for A \ {a} and A;

Or, equivalently if A is contained strictly in B, b is in B \ A, A is countably infinite then: there's a bijection for A $\bigcup$ {b} and A;

(Similar to a previous answer for your question)

If A is uncountable, you can choose a subset in A as A' that is countable, and do a similar thing to add element to A'. (similar proof for removing element from A, by choosing the element you wish to remove in A')

By this, you can add \ remove as many finite element to an infinite set A as possible, and still have a bijection between them. This is a famous question, called "Hilbert's Hotel", to the name of German Mathematician David Hilbert, you can see more on wiki.

(In fact, (1) if A is countably many, you can even add countably infinite elements to A, and there's still a bijection; and sometimes, you can also do this for removing (2) if A is uncountable, you can always do this for both add/remove a coutably many set to/from A)

Thus, both are countable union of disjoint intevals of type $(a,b]$ for wich the user1411893 knows how to prove that they are in bijection with each other.

Not the answer you're looking for? Browse other questions tagged functions elementary-set-theory or ask your own question.