I want to calculate the number of $8$ letter words that can be formed using the letters of the word $TIDE$. However, in any word only one permutation of the word $TIDE$ should be present. That means among the $8$ letters I should not have four twins.

For example, $ITDETTDD$ is a valid word since I have only one permutation of $TIDE$ and I cannot get other if i remove already obtained Permutation. But the word $TTIIEEDD$ or $TDEIDEIT$ is not valid since I can get two possible permutations.

EDIT: Well i got a different way to do it:

Since each letter must appear atleast once,In four places if we fix the letters $T$, $I$, $D$, $E$. then remaining four places have the following possible cases

Case $1.$ Words of the form $TIDETTTT$ which means eaxctly one letter repeated four times in other four places. So number of such words is

Case $2.$ words of the form $TIDETTTD$ where exactly two letters occupy in other four places, but one repeats thrice.So all such words are

Case $3.$ Words of form $TIDETTDD$ where exactly two letters occupy in other four places,but each repeated twice. Number of such words are

Case $4.$ Words of form $TIDETTDE$ where exactly three letters occupy other four places and among them one repeats twice. Number of such words are

The wording of the problem is unfortunate, since the usual meaning of string is sequence of consecutive letters.

You have dealt with the "TIDE does not occur twice" correctly. However, you have not counted the words in which TIDE occurs at least once correctly, for there certainly are not $4^8$ such words.

To count them, we can either divide into cases or use Inclusion/Exclusion. We carry out most of the Inclusion/Exclusion process. There are $4^8$ words. Let us count the bad words, in which at least one of the letters is missing. There are $3^8$ words in which T is missing, and the same with the other letters. If we add up, getting $4\cdot 3^8$, we are double-counting the bad words in which, for example, T and I are both missing. There are $2^8$ such words, and there $\binom{4}{2}$ ways to choose the two missing letters.

This is tedious but.

Case 4a: Arbitrary: 4 choose for the triple letter; 3 for the single letter.

There are 65536 total combinations of the available letters and there are 2520 combinations containing two of each letter. Therefore:

If we must also exclude those combinations that lack a letter (24712) then:

There is no overlap in the two sets of exclusions so they can be directly subtracted.

To generate the exclusion counts, I used an Excel spreadsheet: 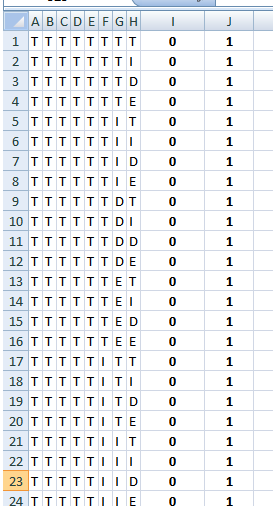 I placed all 65536 combinations in columns A through H. Column I represents the four twins exclusion:

and copy down. Column J represents the missing letter exclusion; so in J1:

and copy down..........the exclusion values are just the simple sums of columns I and J.

Not the answer you're looking for? Browse other questions tagged combinatorics permutations or ask your own question.

7
How many different words can be formed using all the letters of the word GOOGOLPLEX?
5
Number of permutations of the word "PERMUTATION"
3
Ways to arrange a word so that no vowel is isolated between two consonants
1
Number of five-letter words that use letters from the set $\{A, B, C, D, E\}$ and contain exactly three different letters.
3
Words of length $10$ are formed using the letters A, B, C, D, E, F, G, H, I, J
2
Combinations with Restrictions
1
Number of words that can be formed if letters can be repeated as one wants.