Constructing a spherical triangle of a given surface area

One approach might be to slide point $q$ along the arc from $p_1$ to $p_3$ (or likewise slide it along the arc from $p_2$ to $p_3$) until the area matches $f\Delta$. Using this method we already know one angle, that is, A (or B if we slide $q$ along the other arc). The other two angles (let's call those $D$ and $E$) are unknown. I don't seem to have enough information to compute $q$ this way (e.g. using the spherical sine/cosine rules) using a direct approach — I could use an iterative approach, but that is not what I'm after. 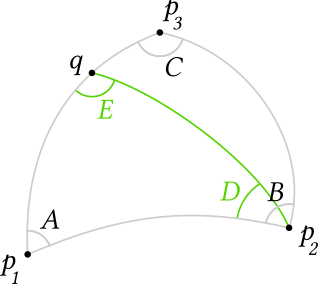 Another approach might be to somehow use a spherical isosceles triangle, but I'm not familiar enough with spherical geometry to know whether — given an arc $p_1p_2$ — there exists a spherical triangle where the other two arcs $p_2q$ and $qp_1$ are of equal length and where their angles with the given arc are the same such that its area is $f\Delta$.

Not the answer you're looking for? Browse other questions tagged area spherical-geometry or ask your own question.