How can we find geodesics on a one sheet hyperboloid?

I am looking at the following exercise:

We have that a curve $\gamma$ on a surface $S$ is called a geodesic if $\ddot\gamma(t)$ is zero or perpendicular to the tangent plane of the surface at the point $\gamma (t)$, i.e., parallel to its unit normal, for all values of the parameter $t$.

Equivalently, $\gamma$ is a geodesic if and only if its tangent vector $\dot\gamma$ is parallel along $\gamma$.

Could you give me some hints how we can find in this case the geodesics?

First, look at some pictures of hyperboloids, to get a feeling for their shape and symmetry.

There are two ways to think of your hyperboloid. Firstly, it's a surface of revolution. You can form it by drawing the hyperbola $x^2 - z^2 = 1$ in the plane $y=0$, and then rotating this around the $z$-axis. 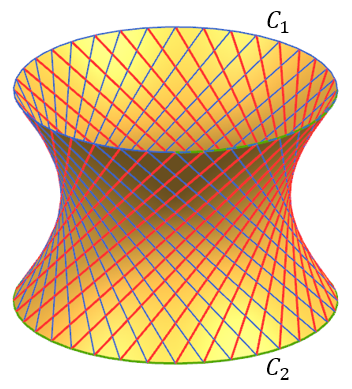 To identify geodesics, we will use two facts that are fairly well known (they can be found in many textbooks):

Fact #1: Any straight line lying in a surface is a geodesic. This is because its arclength parameterization will have zero second derivative.

There are infinitely many geodesics passing through the point $(1,0,0)$. But, using our two facts, we can identify four of them that are fairly simple. They are the curves G1, G2, G3, G4 shown in the picture below: 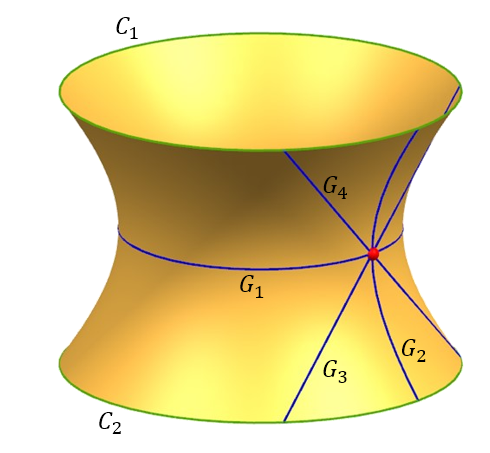 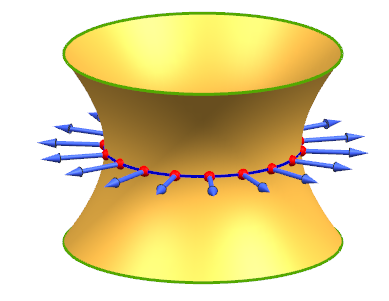 For another hand, the Christoffel symbols of $S$ are:

With the values above, system (1) becomes

Hint For two geodesics, consider the planes $\Pi$ of symmetry of the hyperboloid $H$ through $(1,0,0)$, and use symmetry and the uniqueness of geodesics to argue that the curves $\Pi \cap H$ must be geodesic. For the other two, one can use that the hyperboloid of one sheet is doubly ruled.

Additional hint For the first two, consider a geodesic $\gamma$ through $(1, 0, 0)$ tangent to $\Pi \cap H$ at that point. By symmetry, the reflection of $\gamma$ through $\Pi$, call it $\widetilde{\gamma}$, is geodesic and it has the same tangent vector at $(1, 0, 0)$ as $\gamma$. So, by uniqueness of geodesics, $\widetilde{\gamma} = \gamma$, and in particular $\gamma$ is fixed by reflection and so is contained inside $\Pi \cap H$. For the second two, since $H$ is doubly ruled there are two straight lines through $(1, 0, 0)$ contained in $H$. In particular the constant-speed parameterizations of these lines have zero acceleration, and hence they have zero normal acceleration (regarded as curves in $H$), so they are geodesics.

There are infinitely many geodesics on it in each direction. The meridian, the circumference at neck ( minimum radius), two ruled straight line asymptotes are the 4 principal geodesics you refer to.

as shown for the 4 important geodesics : 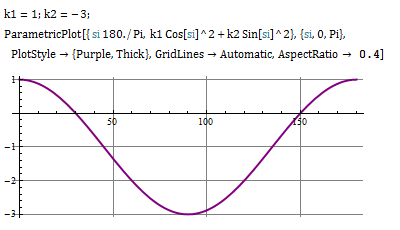 As it is a surf of revolution differential geometrical methods lead to the Clairaut's law.

For getting a $ r- \theta $ relation for any start angle, combine slope and Clairaut's law relations (3), a=1, in:

for any geodesic start angle $\alpha$ chosen ( need not be among the four. )

Elliptic integrals may be used for closed form but faster to numerically integrate and plot.

It may be instructive here to mention three types of geodesic behaviour around a hyperbolic point, we can see it neatly in the easier_to_handle surfaces of revolution:

$ r_o < a $. As given already in the sketches the geodesic shoots through from one horn to the other.

$ r_o > a $. The geodesic U-turns ahead of $ r = r_o$ . In Filament winding practice it is called a turnaround. Google images by this name if wish intuition to match mathematical formulation.

The red wire shows behavior of returning geodesic ahead of the neck of a bamboo stool, a particularly good example of our surface with its straight ruled asymptotic ruled generators. 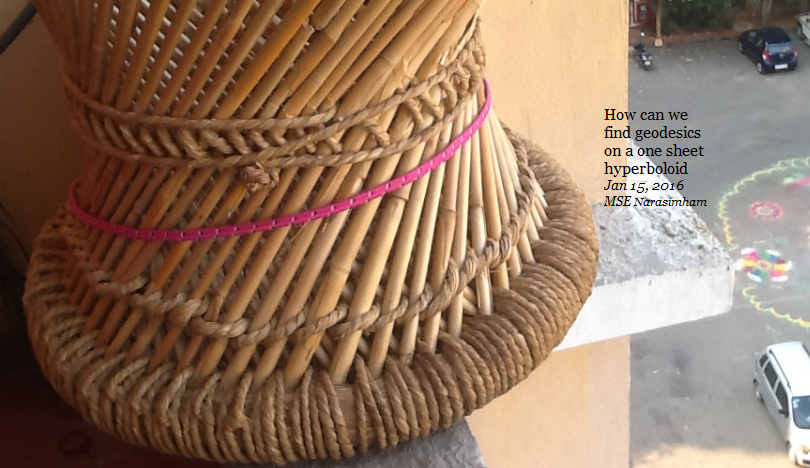 [ Please ignore this para for time being... A plane parallel to its axis and cutting exactly at circle of min radius produces the asymptotes. It may confuse in the begining that they are geodesics, asymptotes and rulings of the ruled surface all at same time].

Not the answer you're looking for? Browse other questions tagged differential-geometry surfaces geodesic or ask your own question.

5
Geodesics: a (for me) "mysterious" property related to affine parameters.
1
Geodesic - How can we continue?
3
Proof of geodesic has constant speed
0
Find the geodesics of a surface with orthonormal parametrization
1
How can I find the geodesics on the cylinder $x^2 + y^2 = 1$?
3
Geodesics in hyperboloid model of hyperbolic geometry