Why does Ridders' method work as well as it does?

I've just read section 9.2.1 in Numerical Recipes Ed. 3 (Press et al. 2007), which describes Ridders' method of root finding. I understand that allowing for some curvature of the function by linearizing three points with an exponential will probably get you a better approximation and more rapid convergence, but I have no idea how they get that it converges quadratically, and the motivation behind choosing an exponential (rather than e.g. a polynomial) is not clear to me.

So, specifically, I'm wondering (1) why linearize with an exponential, and (2) why the method converges quadratically.

I tried looking for Ridders' original paper "A new algorithm for computing a single root of a real continuous function", but the only copy I could find was in a journal that my school's library does not give me free access to.

I've realized that the fact that an exponential is strictly positive means that weighting the three points with an exponential won't change their signs. Hence, the root of the linearization will have to land inside the original bracket.

Polynomials, rationals, sinusoids, and logarithms all have positive and negative bits, so using them probably runs the risk of getting bad interpolated roots. One of these squared might be usable, but maybe non-monoticity gives some sort of undesirable effect. Since this is a complete list of all simple functions that I am aware of, exponentials seem to be the only easily available weighting function with this property.

A constant function is also technically single-signed and monotone, but it can't be used to linearize stuff.

The Ridders article is very brief, less than 2 pages including graphs and numeric examples. The section on convergence is tiny, leaping from the simple to the conclusion with almost no explanation beyond "after some adequate [but unspecified] approximations" between.

But how to get there remains a mystery to me ;-)

In practice, it does seem to be quite robust! The transformation does preserve the zeroes and the signs. While it may not be obvious at first, each iteration at least cuts the bracket width in half, so it can't take more iterations than bisection (although since each iteration requires two function evaluations, it may require more evaluations than bisection). For a linear function, the transfomation effectively multiplies by 1 (i.e., does nothing), so does no harm. If a function is monotonic over a bracket, and convex or concave, the transformation pushes $x_3$ to the correct side of the midpoint to get closer to the root.

Should also note that, contrary to a comment, it's numerically well behaved. For example, while (using Wikipedia's notation): $$f(x_1)^2 - f(x_0) f(x_2)$$ may "look like" it's subtracting two positive numbers, thus potentially suffering massive cancellation, it's actually adding two positive numbers (the function values at the bracket endpoints have opposite signs): full machine precision is being exploited here.

In other 3-point methods where the error is proportional to the product of the prior 3 errors, the order of convergence is $\approx 1.84$ (for example, Muller's method, and other 3-point variants of the secant method). But even that isn't clear here: in the Ridders method, $x_1$ (and so also $e_1$) isn't derived from the main computation, but is merely the average of $x_0$ and $x_2$.

So I just don't believe the "quadratic convergence" claim in general here. It's nevertheless a fine method in practice! In my experience, a high order of convergence rarely matters unless working on arbitrary-precision libraries.

Short course: empirically, there's no evidence that the Ridders method enjoys quadratic convergence except in cases it's exceptionally well suited to. Of course someone else should verify this independently before believing it.

I tried some examples under the Ridders method, and under Tiruneh's clever 3-point secant method. The latter has order of convergence $\approx$ 1.84, via an argument that's relatively straightforward to follow.

I used decimal floating-point with 100 digits of precision (Python's decimal package), because things converge so fast it can be hard to detect patterns in native IEEE double precision.

A summary of some "typical" cases:

Ridders did very well on $5^x - 3125$, with root 5, and starting points 0.3 and 7.0. That was close to quadratic, but on the low side. This was expected to do very well, since the Ridders method transforms the function by a kind of exponential smoothing. Tiruneh was 1.84 on the nose.

But Ridders did poorly on the seemingly very easy $x^2 - 4$, with root 2 and starting points 1 and 4. The COC ("computed order of convergence", via the formula above) started at 1.24 and decreased quickly to 1.12, then continued falling more slowly to 1.06, when the root was found. Tiruneh's COC was again $\approx$ 1.84 throughout, and converged much faster.

On the other hand, Ridders does great on the nightmare $e^{x^2 + 7 x - 30} - 1$, with starting points -10.5 and -9. That looks like a block capital "U", essentially -1 inside (-10, 3), essentially infinity outside it, and briefly hitting 0 at -10 and 3. Tiruneh makes slow progress, fighting for dozens of iterations just to get the first few digits right. Then it zooms in quickly (order 1.84). Ridders is extremely effective, in part because it's good at smoothing out exponential growth, but also because the way in which it (at least) cuts the bracket width in half each time manages to replace both bracket endpoints on each iteration. It enjoys quadratic convergence from the start.

Which reinforces a tradeoff mentioned earlier: there's no guarantee that Tiruneh will converge. Indeed, it's possible (but unlikely) for it to blow up (division by zero) even in simple cases if the function isn't strictly monotonic. But it doesn't require that its initial arguments straddle a root either. You get what you pay for ;-)

So, bottom line for me: there's no reason (neither in theory nor in practice) to believe the Ridders method has quadratic convergence in general. It can show that for functions with exponential growth, but falls to merely low-order superlinear convergence even for simple polynomials. Against that, it does always converge, and in no more iterations than bisection needs.

I expect a proper convergence analysis of the Ridders method would be technical and quite involved. It's really a 2-point method, which creates 2 additional points on each iteration, and may replace both the points the iteration started with. The code is easy enough, but that complicates analysis.

A bit of insight

Note: I'm going on here because I found this question when doing my own search for a decent discussion of the Ridders method. I didn't find one, so I'm making this what I wanted to find ;-)

Why is Ridders so ineffective on, e.g., $x^2 - 4$? For example, is "taking the bend out of the curve" systematically damaging in this case?

No! It's actually quite effective. It's maintaining the guarantee of convergence that hurts.

That and the midpoint are carried over to the next iteration (among the 4 internal points, the two spanning the narrowest bracket where $f()$ has different signs at the endpoints).

The new midpoint is 2.236... and the calculated value 1.99991... Those two are carried on to the next iteration, and that's what costs: 2.236 is still a rotten approximation, but remains the smallest we've seen where we know $f()$ is positive. Other secant-like methods, which don't guarantee to keep the root bracketed, would carry 1.973... and 1.99991... to the next iteration, vastly increasing the rate of convergence.

But then why is, e.g., $e^{x^2 + 7 x - 30} - 1$, with starting points -10.5 and -9, so effective? It turns out that, in that case, successive iterations alternate between overshooting and undershooting the root -10. This gives rapid convergence to the root from both bracket ends. The final iteration (at which $x_3$ rounds to exactly -10) starts with incoming $e_0 \approx -{10}^{-28}$ and $e_2 \approx {10}^{-56}$. The transformation is very well suited to this particular function, and gets 100 decimal digits correct out of those two. But it's more important that both endpoints moved substantially toward the root on the way there.

In that case, the "bad" Ridders examples given before all converge at least quadratically. Perhaps that distinct variation is what Ridders had in mind when he wrote "The rate of convergence is shown to be quadratic or better." (which his article does not show).

CAUTION: This explains why I saw quadratic convergence in some cases, but it's not safe in general. For example, without maintaining the guarantee that $F(x_0) \cdot F(x_2) \lt 0$ (i.e., that the function has different signs at the endpoints), there's no guarantee either that the square root needed is real. Indeed, there's not even a guarantee that $x_3$ will be between the incoming $x_0$ and $x_2$. 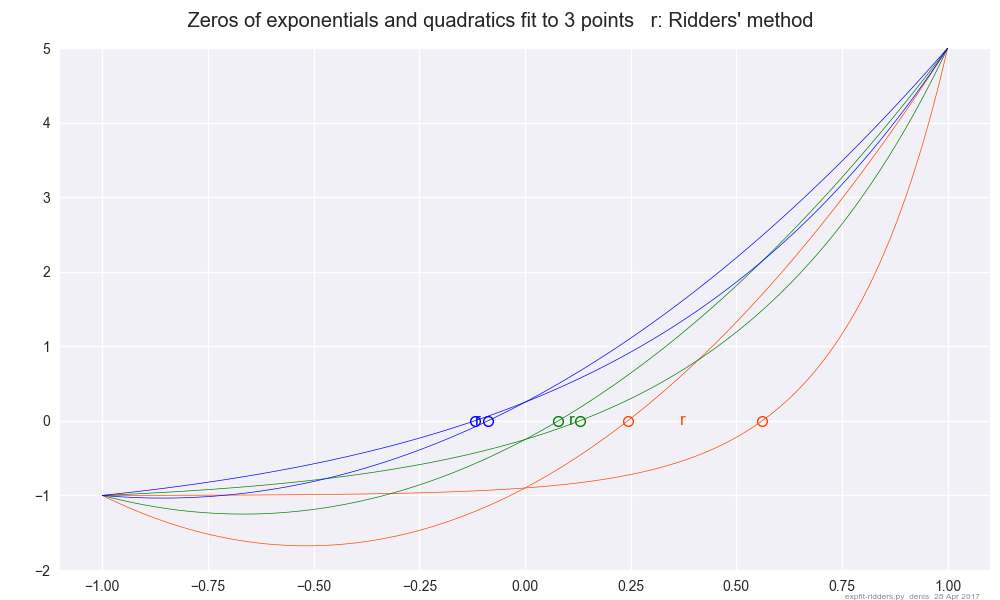 Not the answer you're looking for? Browse other questions tagged numerical-methods roots or ask your own question.

1
Ridder's method advantage over other methods?
0
How does the inverse quadric interpolation help us find the root?