I was referring to this MIT OCW slides to learn about resolution refutation.

Recently I came across following problem:

Check if following is tautology

Then applied resolution refutation as follows: 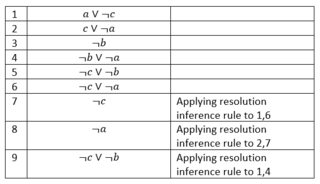 I am not able to reduce this to false, so I can say that the contradiction is true and the statement is not a tautology. Am I correct with this? Also I have following doubts

Your "conjecture" is correct; as you can verify with a truth assignment $v$ such that :

The Resolution method is suitable for telling whether a propositional formula is satisfiable.

If the example of your question, being unable to derive the empty clause (i.e. a contradiction), we have shown that the formula is satisfiable [try with a truth assignement $v'$ such that $v'(a)=$t and $v'(c)=$f].

But from the fact that a formula $\mathcal A$ is satisfiable, does not follow that it is a tautology.

And this is the case of the example : the formula is satisfiable but not a tautology.

Regarding the "unpacking" of the bi-conditional, the simplest way is to unpack it as :

Does that mean all premises involving biconditional leads to correct contradiction?

I'm not sure to understand it. If you are saying that all formulae involving a bi-conditional are satisfiable, this is clearly not true. Consider e.g. .

Resolution is also called "Resolution by refutation", because it is essentially a proof by contradiction; we have to start negating the desired conclusion, i.e asserting that the thing that we're trying to prove is false, and then we try to derive a contradiction.

We apply the Resolution rule until either we can derive "false" (the empty clause): if we assert that the negation of the thing that we're interested in is true, and then we derive a contradiciton, then we've succeeded in a proof by contradiction.

Resolution is a sound and complete proof procedure; for details, see :

We call resolution expansion for for $\{ X \}$a sequence of application of the resolution rule starting with the formula $X$.

Theorem 3.4.8 (Propositional Resolution Soundness) If $X$ has a resolution proof, then $X$ is a tautology.

Using Hintikka's Lemma (every propositional Hintikka set is satisfiable), it is possible to prove the (Propositional) Model Existence Theorem : every resolution expansion that is not closed can be embedded into a (propositional) Hintikka set, and thus it is saisfiable.

Theorem 3.7.9 (Completeness for Propositional Resolution) If $X$ is a tautology, $X$ has a resolution proof.

Not the answer you're looking for? Browse other questions tagged logic propositional-calculus predicate-logic first-order-logic or ask your own question.

2
Resolution Proof Question
0
Equivalence of $\forall x (L(p,x) \implies \neg L(s,x))$
1
Proving unsatisfiability with propositional resolution
0
How to apply the resolution rule to $\{q;\neg q\}\{q;\neg q\}$?
1
Interpreting resolution rule of inference
1
proof by resolution?
0
Resolution refutation of a tautology not resolving.
1
Is this a valid or invalid inference?
1
Inference Proof for Biconditional
2
Why Does Order of Negation Matter in First Order Logic Resolution?