Center of Arc with Two Points, Radius, and Normal in 3D

I'm struggling to get the math to work out on this. I need to derive an alorithm for a program where I'm representing geometric entities. In this case, it's an arc. I would like to create the arc in 3D space using two points, the radius, and a normal. Any help would be greatly appreciated.

I'm just trying to derive an algorithm to find the center point of the circle defining the arc with the aforementioned given in 3D space. Any help would be greatly appreciated.

The figure below shows the arc and the height calculation from the chord length $\ell$ and radius $r$. 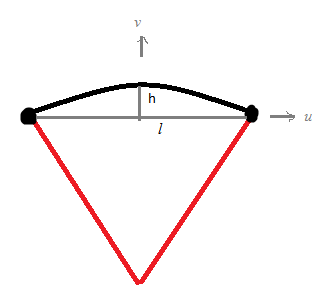 You can get a result matching the problem statement (but not the only result; see below) by carefully reading the comments of this other answer and using them to correct the formulas in the answer itself. But you can further simplify the problem by skipping the entire question of the midpoint of the arc.

So let's say you are given the radius $r,$ a vector $n$ orthogonal to the plane of the circular arc, and the two points $p_1$ and $p_2$ at the endpoints of the arc. (Depending on how the problem is actually encountered, $n$ may be a unit vector, but I am not going to make that assumption.)

The $\pm$ sign signifies that there are actually two such unit vectors pointing in opposite directions, which is due to an ambiguity in the problem statement; the normal defines a plane through one of the endpoints of the arc and the other endpoint must lie in the same plane (or else the problem is ill-posed), but given two points in a plane and a radius greater than half the distance between the points there are two circles through those two points with that radius, each providing a different arc with those endpoints.

Choose one of the two possible vectors called $\hat v$ in the formula above; then $$ p_c = p_m + b \hat v $$ is the corresponding center of the arc.

There is a further ambiguity in the problem statement that did not need to be considered when finding the center: is the arc the shorter arc between the given points, or the longer arc? (Or might it even be an arc that goes around the circle more than one full circumference?)

The ambiguities in the problem statement can be eliminated by placing extra conditions, for example we can explicitly say we are looking for the shortest arc between $p_1$ and $p_2$ with radius $r$, and we can say that the vectors $p_1 - p_c,$ $p_2 - p_c,$ and $n$ (in that sequence) should form a right-handed coordinate system. But you would need to look more carefully at how the problem was encountered in order to determine what the correct conditions are.

Not the answer you're looking for? Browse other questions tagged linear-algebra geometry euclidean-geometry analytic-geometry 3d or ask your own question.

11
arc-arc intersection, arcs specified by endpoints and height
1
How do I find the start and end point of an Arc? Using center xy, radius and start/end angle values.
3
Finding circle with two points on it and a tangent from one of the points
2
3 Points in 3D Space to find the center of an Arc or Circle
1
Plotting an arc with no center point - a practical solution please!
0
Arc length function given circle radius and two bounding line segments
1
Center of mass of a circular arc
9
Given a circle of radius r, and two points ('X' and 'Z') on that circle, can some circumcircular arc "XYZ" be constructed of length r?
0
Find arc midpoint in 3D given start, end, center, normal and rotation direction
0
Determine center from two points on the perimeter and radius, need more points for unique solution?