How are the elements of a dihedral group usually defined?

While searching online, I've come across two ways to define the elements of the dihedral group. Both ways are internally consistent and are fine as far as I can tell, but they are mutually exclusive, so I was wondering which of the two ways is more standard or commonly used.

The two ways are as follows:

Way 1. Elements are defined as transformations against a fixed set of axes.

The reflectional symmetries are described as follows: An $n$-gon has $n$ axes of symmetry. For each axis of symmetry in the $n$-gon there is an element in the dihedral group that reflects the $n$-gon along that axis. It is important to note that these axes stay fixed, even after the n-gon itself undergoes a rotational symmetry.

Similarly, there are $n$ rotational symmetries in the $n$-gon being discussed, and each of these rotations is a member of $D_n$. It is important to note that here, the rotations are always in the same direction, even if the shape undergoes reflectional symmetry. So, for example, an element $r$ that rotates a square $90^{\circ}$ clockwise will always rotate the square $90^{\circ}$ clockwise, even after the square is reflected.

Way 2. Elements are defined as permutations of vertices. 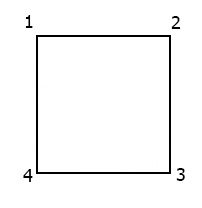 Way 2 is actually distinct from Way 1, both geometrically and algebraically (as far as I can tell).

There are still $n$ rotations and $n$ reflections, but unlike in Way 1 where the transformations are defined in terms of a fixed "background" which doesn't move as the $n$-gon undergoes rotation or reflection, the transformations in Way 2 are now defined in terms of the vertices of the $n$-gon, which DO move as the $n$-gon undergoes rotation or reflection. What this means is that in Way 2, the transformations change depending on the current orientation of the $n$-gon. For example, consider the rotation of a square. In Way 1, we can let $r$ be the element that rotates the square $90^{\circ}$ clockwise. The direction of rotation ($90^{\circ}$ clockwise or, equivalently, $270{\circ}$ counterclockwise) never changes, even after the square is reflected across one of its axes of symmetry. On the other hand, the roughly corresponding rotation in Way 2 would be something like the cycle $(1234)$. Unlike $r$, which always rotates the square $90^{\circ}$ clockwise, $(1234)$ may rotate the square $90^{\circ}$ either clockwise or counterclockwise, depending on whether the square has been reflected or not. Similarly, the axes of reflection in Way 2 move along with the square, while those of Way 1 remain fixed.

The fact that the two ways are non-equivalent can also be verified algebraically (I think...). No isomorphism exists between the two Ways (at least as far as I can tell; I tried constructing an isomorphism by making a bijection between the elements as defined in Way 1 with the elements as defined in Way 2, matching the rotations and reflections in Way 1 with the corresponding ones in Way 2, but the bijection did not satisfy the criterion that $f(a)f(b) = f(ab)$ for all $a$, $b$ in Way 1. The problem arose when $a$ was a rotation and $b$ was a reflection. However, if there actually is an isomorphism that I overlooked, please correct me.)

My main question is: Which of these two ways is standard, or used more often by working mathematicians? Are both acceptable?

It seems to me that Way 2 is just nicer all-around, mainly because all of the elements are permutations and can thus be written as cycles, which are easy to work with algebraically (by Cayley's Theorem, Way 1 is isomorphic to some group of permutations anyway, but then it seems like kind of a hassle finding a way to write it as cycles and whatnot.)

If there are some benefits to Way 1, then I would like to learn about those too. Thanks in advance for those who bothered to read through all this!

In practice, it is quite useful to have all these various ways to think about $D_n$ (and other groups).

The Way 2 by permutations is good only for small orders (say up to order $8$ or $10$). I have not seen its use for some specific purpose.

(The third way in an answer is better in some computation purposes.)

Not the answer you're looking for? Browse other questions tagged group-theory dihedral-groups or ask your own question.