What are some math books written in dialogue or story form, e.g., a teacher explaining to a student?

Good examples would be The Square Root of 2 by David Flannery or Math Girls by Hiroshi Yuki.

I don't know if there are any particular topics you're interested in, or at what level of detail you want them presented, but Knuth's Surreal Numbers is an example of the sort of book you mean:

B. You mean we're actually using the New Math to decipher this old stone tablet?

B. Hold it, your notation mixes me up. I don't know what's a set and what's a number.

The Number Devil: A Mathematical Adventure Is very good; It explains complex concepts in ways simple enough that young children can understand them, yet complex enough to maintain an adults attention with the revelations and connections it provides.

I don't know if it counts as a math book, but Hofstadter's "Gödel, Escher, Bach" contains a large number of very entertaining dialogues that help to explain concepts in logic such as Gödel's incompleteness theorems, usually disguised in the form of some kind of fable involving Achilles and the tortoise.

Flatland by Edwin A. Abbot comes to mind. It is an "easy" introduction to higher dimensions.

Flatterland is probably more mathematical, though. It introduces many modern concepts like topology, hyperspace, etc. and is indeed like a teacher (the "Space Hopper") explaining to a student (the 2D being Victoria Line).

Galileo's Dialogue Concerning the Two Chief World Systems is the patriarch of this genre.

There is a math book (not the Lockhart essay, but I do not remember the title), that uses Galileo's antagonists Simplicio and Salviati to explain the material through a series of dialogues.

Barron's has 3 books that are in story form. The story in these actually builds on each other and they can be read in this order:

I'm not sure if they they have the exact form that you want, but they have mathematics, dialogue and story:

Remark 2: I didn't read these books and I have no idea if they are a good. The only thing that I know about them is that they do exist.

I would recommend "Proofs and Refutations" by Imre Lakatos. It is not so much a real story as a series of dialogs between students in a classroom, nicely illustrating much of the mathematician's handiwork.

It is sometimes said that it was a play , not sure if it was ever preformed on stage

A Certain Ambiguity is a book by Gaurav Suri and Hartosh Singh Bal. Although it is a novel, it addresses some very deep parts of mathematics, including Euclid's Fifth Postulate and the concept of infinity. Because it is a novel, most of the mathematics is explained in the dialogue from one character to another.

They are written in Italian, so I don't know how many people may enjoy them, but Roberto Zanasi wrote two books in form of a dialogue between a Vero matematico ("True mathematician") an an apprentice:

Verso l'infinito, ma con calma (To the infinite, but with ease), about infinity in mathematics

Heyting's Intuitionism: An Introduction begins with a dialogue between proponents of different schools of mathematical philosophy.

I quite like the Life of Fred Math books. The math is all taught by having the main character, Fred, encounter situations where he requires the math principle.

The Man Who Counted

From Wikipedia: The Man Who Counted (original Portuguese title: O Homem que Calculava) is a book on recreational mathematics and curious word problems by Brazilian writer Júlio César de Mello e Souza, published under the pen name Malba Tahan. Since its first publication in 1938,[1] the book has been immensely popular in Brazil and abroad, not only among mathematics teachers but among the general public as well.

The book has been published in many other languages, including Catalan, English (in the UK and in the US),[2] German, Italian, and Spanish, and is recommended as a paradidactic source in many countries.

I just came across Math Dialogue: Functions which states that it «is a very gentle introduction to the concept of the function, written in form of a dialogue.» I did not read it, though.

I know I'm a bit late, but I recently came across the lovely book Treks into Intuitive Geometry, which consists of a series of conversations between Gen and Kyu, as can be seen in the image below. The whole book appears to be written in this format. 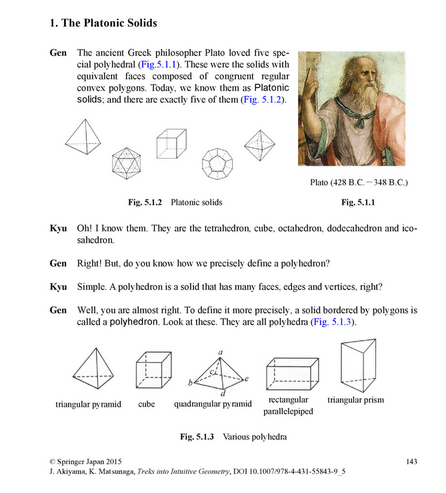 Lawvere and Schanuel, Conceptual Mathematics: A first introduction to categories has many such passages, reflecting the classroom atmosphere from when the material was first taught.

Not the answer you're looking for? Browse other questions tagged reference-request soft-question recreational-mathematics education big-list or ask your own question.

14
What are some good Fourier analysis books?
18
Explaining what real math is to a high school student
1
Looking for some decent math books and solutions
5
Are Gilbert Strang's books on calculus and linear algebra suitable for math majors?
4
What are some books that are in the spirit of David A. Cox' “Primes of the Form $x^2+ny^2$”
42
What are some surprising appearances of $e$?