Problem with understanding a step in epsilon-delta proofs

In the many epsilon-delta proofs I have seen for the various limit rules, most include a step where they define new epsilons from the one provided then go on to state that "There exists $\delta_1$ for every $\epsilon_1$ such that for every $x$ the expression...". An example of such a step is this, found here http://www.milefoot.com/math/calculus/limits/GenericLimitLawProofs04.htm: 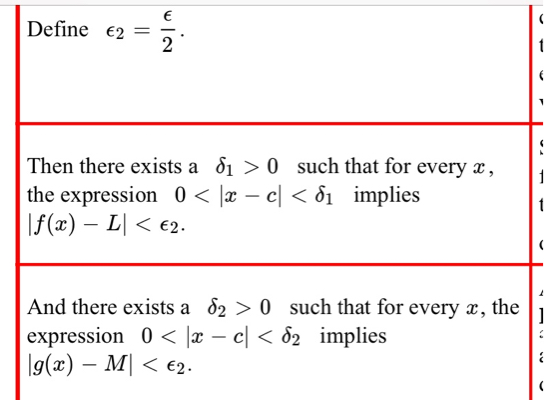 Now, I am fine with this step, however, the proofs usually then go on to choose a delta for the proof they are working, often defining it as the minimum of the already existent deltas. And, from this delta they then go on to state a list of implications. Such an example is this: 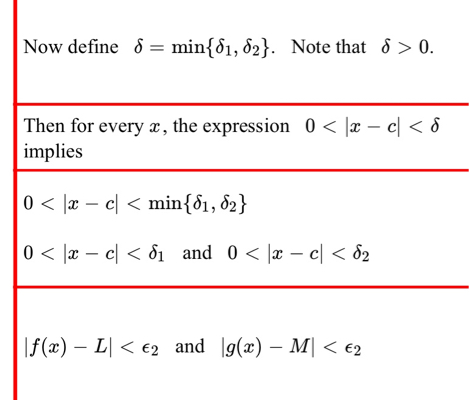 Recall that we start from two statements of the form $\forall \epsilon\exists \delta\ldots$ and want to show a third statement of the same form. The $\epsilon$'s and $\delta$'s of these statements are unrelatetd. For the proof we must start from an arbitrary $\epsilon$, then make use what the given statements give us (they give us just "some" $\delta$, and each may give us a different one), and from this we have to construct yet another $\delta$ that works for the target claim.

Not the answer you're looking for? Browse other questions tagged real-analysis proof-verification epsilon-delta or ask your own question.

4
Can the choice of epsilon be arbitrary in epsilon-delta proofs?
4
Epsilon delta proof; constraining delta.
3
Logic Behind Epsilon-Delta Proofs (Single-Variable Calculus)
3
When $\delta$ decreases should $\epsilon$ decrease? (In the definition of a limit when x approaches $a$ should $f(x)$ approach its limit $L$? )
3
Is this a valid proof that if an element $x$, is within the closure of a set $A$ (in a metric space) then $\exists (a_n) \in A : a_n \rightarrow x$
2
Uniform Convergence Preserves Continuity
0
Trying to prove $\lim_{x \to a} c f(x) = c \lim_{x \to a} f(x)$
0
Question about what is formally being stated in an epsilon-delta proof
0
What is the correct proof that when $\epsilon$ decreases (in a limit) then the largest $\delta$ should also decrease?
0
Am I correctly interpreting the epsilon–delta definition of continuity?