Why can one discriminate between the trivial $S^1$ line bundle and the Möbius strip by knowing the fibre transformation group?

Both $S^1\times\mathbb R$ and the Möbius strip can be regarded as line bundles over $S^1$.

I have read that one can reconstruct a fibre bundle by knowing its base space, its fibre and the bundle group. In the standard definition of both $S^1$ line bundles (with two charts on $S^1$), both have the same base space $S^1$, the same fibre $\mathbb R$. Their difference is in the bundle group, which is trivial in the case of the trivial bundle, and $\mathbb Z_2$ in the case of the Möbius strip, because at one "coordinate patch", we have to switch the 1-dimensional coordinate $x^1\mapsto-x^1$.

What if we do this on both coordinate patches? If the $\mathbb Z_2$ transformation $x^1\mapsto-x^1$ is done at both patches, then we have a line bundle over $S^1$ that looks like this: 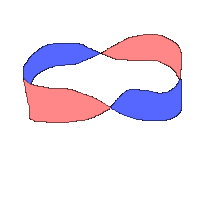 I hope the image is clear. It should be a "double Möbius strip", meaning instead of just one twist in the strip there are two twists. The second twist reverses the action of the first one, so the resulting line bundle is the trivial bundle $S^1\times\mathbb R$.

This line bundle has the same parameters as the Möbius strip (same base manifold, same fibre, same group), but it's the trivial one.

What did I understand wrong? What's the precise mechanism of "re-constructing" a bundle?

Not the answer you're looking for? Browse other questions tagged vector-bundles fiber-bundles or ask your own question.

1
An obviously false proof that all line bundles are trivial.
8
Can one exchange fibre and base space in a fibre bundle?
4
Why doesn't this argument show the Möbius bundle is trivial?
1
Do flat manifolds only admit trivial bundles?
8
What distinguished the Möbius strip from the cylinder as fibre bundles?