What is the trellis diagram for a linear block code?

For the convolutional codes there is so-called trellis diagram, for which the definition is rather clear for me, however in mathematical sense is not.

I have heard that it can be defined for linear block codes also. Linear codes have very simple mathematical meaning - just the linear subspaces in $(F_q)^n$. So I guess the "trellis" should also be something simple.

So what is the trellis for a linear block code ?

This question is studied very extensively in Alex Vardy's chapter in Handbook of Coding Theory. I describe the idea below.

To get a trellis for a linear block code $C$ we need to define something like a time axis for the positions of the individual symbols of all the codewords. So basically an ordering of the symbols: this is the first symbol, this is the second,..., this is the last. Later on we may want to change the ordering, but let's fix one for now.

The trellis collects information about which beginnings of codewords can be matched with which endings in such a way that the end result will be a valid codeword. In the case of a linear code this translates into the following algebraic formulation.

What this amounts to is that for each codeword $\vec{c}\in C$ there is a unique path from $(0,V_0(C))$ to $(k,V_k(C))$ such that at each split point $i_t$ the path passes thru the vertex $(t,\vec{c}+I_{i_t}(C)\oplus F_{i_t}(C))$, and that it follows the edge associated with $\vec{c}+T_t$ between those two vertices. We can read the components of the codeword $\vec{c}$ by concatenating the labels of the edges along the path. Furthermore, it is not to hard to show that all the paths through the trellis represent valid codewords.

We can then decode using the Viterbi algorithm taking advantage of partial codewords shared by many words – exactly as in the case of convolutional codes.

The catch is that the number of either states or edges may easily be prohibitively large. For example, if systematic encoding is used with a $k$-dimensional code, then there are no shared sequences of $k$ first symbols among any codewords (because all those symbols are payload, and can be freely chosen by the user). This means that at such early split points the initially trivial subspaces are all trivial, and consequently the state space may be very large (up to $k$-dimensional, possibly smaller).

We can try and play the game of permuting the symbol positions (using non-systematic encoding). This is kind of a "black art", and it is not guaranteed to reduce the size of the trellis significantly. Therefore this is not a magic tool allowing us to efficiently decode any linear code with the Viterbi algorithm. 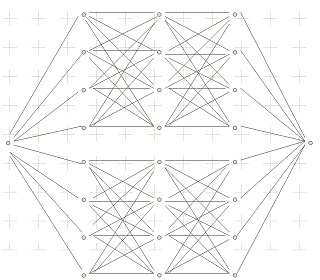 I'm a little rusty on this but let me give it a shot.

This "memory" feature is one of the things that makes convolutional codes different. The second thing is that convolutional encoding takes place basically "one bit at a time" but block codes need an entire block to carry out the encoding step.

A trellis diagram is meant to capture the process of bitwise encoding by recording transitions between states, and the output produced as a function of that state and the input.

A Hasse diagram of the lattice of subspaces of $F_q^n$ is fine, but I don't see any real connection to trellis diagrams.

Not the answer you're looking for? Browse other questions tagged information-theory coding-theory or ask your own question.