How to union many polygons efficiently

I've asked this question at SO, but only answer I got is a non-answer as far as I can tell, so I would like to try my luck here.

Basically, I'm looking for a better-than-naive algorithm for the constructions of polygons out of union of many polygons, each with a list of Vertex $V$. The naive algorithm to find the union polygon(s) goes like this:

First take two polygons, union them, and take another polygon, union it with the union of the two polygons, and repeat this process until every single piece is considered. Then I will run through the union polygon list and check whether there are still some polygons can be combined, and I will repeat this step until a satisfactory result is achieved.

Is there a smarter algorithm?

For this purpose, you can imagine each polygon as a jigsaw puzzle piece, when you complete them you will get a nice picture. But the catch is that a small portion ( say <5%) of the jigsaw is missing, and you are still require to form a picture as complete as possible; that's the polygon ( or polygons)-- maybe with holes-- that I want to form.

Likely the best method is to perform a simultaneous plane sweep of all the polygons. This is discussed in The Algorithms Design Manual under "Intersection Detection." (Algorithms to find the intersection can be altered to instead find the union.) It is also discussed in my textbook Computational Geometry in C, Chapter 7, "Intersection of NonConvex Polygons." The time complexity is $O(n \log n + k)$ for $n$ total vertices and $k$ intersection points between edges of different polygons.

Martin Davis describes an approach on his blog which he calls "Cascading Union".

The approach is to traverse a spatial index like an R-tree, to union polygons that are likely to overlap or touch, which gets rid of a lot of internal vertices. The naive approach might not reduce the number of vertices at all between two iterations...

This can be thought of as a post-order traversal of a tree, where the union is performed at each interior node. If the tree structure is determined by the spatial proximity of the input polygons, and there is overlap or adjacency in the input dataset, this algorithm can be quite efficient. This is because union operations higher in the tree are faster, since linework is "merged away" from the lower levels. 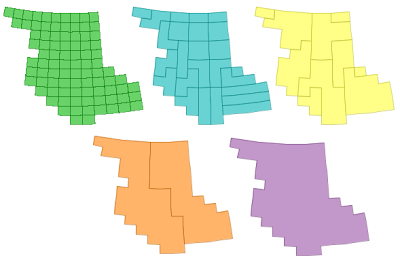 If the polygons either share exactly one edge or are disjoint then create a list of edges and the polygons they belong to and then remove each edge that has two polygons, joining those two polygons.

Not the answer you're looking for? Browse other questions tagged computational-geometry or ask your own question.

1
Polygon: Internal Rays
3
How many rectangles can fit in a polygon with n-sides?
2
What's wrong with this pseudocode for Forster-Overfelt's version of the Greiner-Horman polygon clipping algorithm?
0
Given a set of 2D vertices, how to create a minimum-area polygon which contains all the given vertices?
2
Minkowski sum and vectors
4
Are the closest vertices of two non-convex polygons also part of their closest edge distance
1
Choose irregular polygons from a list of irregular polgyons, to cover a quadrilateral