Finding an invariant under Group operations

Context: I am trying to answer this question about solving the peg solitaire, and I already posted as an answer some code devised for treating the board 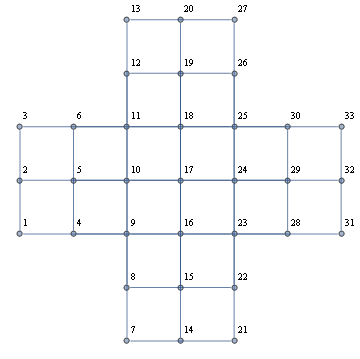 The algorithm in Mathematica for solving the problem I implemented there (please don't care to read the code) is a first try brute force approach which I want to refine.

One way for doing this is aborting the calculation of the branches already explored, and those symmetrically equivalent.

AFAIK, the symmetry of the problem is represented in the Dihedral D4 group.

So my problem: I have a vector with the occupancy state of the board

and I want to find a function that when applied to an occupancy state vector returns the same Real number for all eight symmetric states (and of course bijective, returning a different value for any other input).

For example, the following program in Mathematica calculates a bijective bilinear invariant under D4 for the easy board:

And the result is 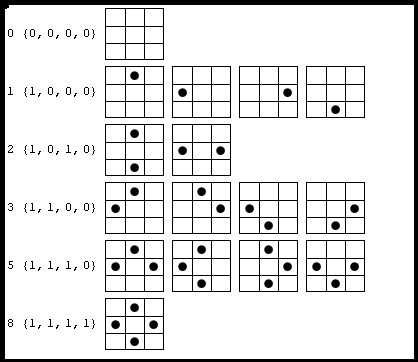 I am sure there must be a better way ...

A symmetry group acts on a set of data structures (the occupancy vectors). The question asks for a procedure to create group-invariant hashes of those data structures. Here is a very general way, requiring only a presentation of the group and explicit definitions of the actions of its generators.

In mathematical notation, the data structures form a set $S$, a finite group $G$ acts on it (notation: any $g\in G$ sends $s\in S$ to $s^g$), and a hash function is an injection $h:S\to\mathbb{N}$. To construct a $G$-invariant function, one usually averages (or sums) over the group. In this application it is computationally a little simpler to minimize over the group: that is, define

This is obviously $G$-invariant. It works well for smallish groups because it requires computing $h$ for up to $|G|$ elements of $S$.

The rest is computational details, pseudocoded in Mathematica.

Let's begin by creating a way to address cells on the board--a way on which the effect of the group action is easy to compute--and storing an array of addresses of all the board cells. Row and column coordinates are an obvious way:

It is convenient to define the group action via generators. This is a Coxeter group, making it easy to find a pair of generators {alpha, beta} and relations:

These addresses have to be associated with the indexes of cells within the board array. The group action will be pulled back to those indexes as permutations of $\{1,2,\ldots\}$, which I store in a variable action indexed by the group itself:

To hash an occupancy vector, it is natural to interpret it as a binary number. To form a hash invariant under the group action, we need a unique representative of the hashes of each orbit. A simple way to choose that representative is to use the one with the numerically smallest hash.

The efficiency is OK:

1
When is round-robin scheduling possible and with in minimal time?
1
Proof of the existence of inverse elements for a group
3
The order of a $k$-cycle in $S_n$ is $k$.
1
Show that $G \cong D_4$.
2
Generators for the $n$-derived group $G^{(n)}$ and the lower central series $G^{n}$
1
Decomposition of an abelian group subject to certain relations
4
Identifying a group that originated from a Wirtinger presentation.