I use Statgraphics for working with statistics. 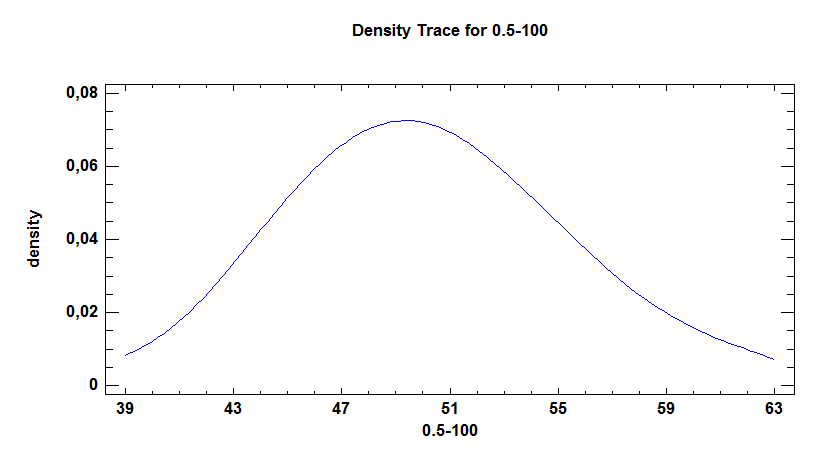 And it passes Kolmogorov-Smirnov test:

So I have theoretical question from probability theory: why first sample acts like Normal and why other two don't?

Whenever you want to put a limit theorem to practical use (such as approximation), your first question should be "how fast is the convergence?" Infinity itself is a 'long way away' Roughly speaking, the convergence in the CLT is more rapid for symmetrical random variables $X_i$ than for skewed ones. Thus, the sum of only ten independent $X_i \sim Unif(0,1)$ (symmetrical) is very nearly normal, while the sum of 25 independent random variables $X_i \sim Exp(1)$ (markedly skewed) is clearly not so well approximated by a normal distribution. The diagram below illustrates this with 10,000 such sums of each type of random variable. The appropriate normal density is shown with each histogram.

The speed of convergence is quite fast in some instances and rather slow in others. A binomial random variable $X \sim Binom(n, \theta)$ is the sum of $n$ independent Bernoulli random variables with success probability $\theta.$ So, for sufficiently large $n$ a Binomial random variable will have a distribution that is 'approximately' normal. In the binomial case, the convergence is much faster if $\theta \approx 1/2$ (symmetrical) than if $\theta$ is near 0 or 1. You have already discovered that $Binom(100, .5)$ is closer to normal than $Binom(100, .01).$

Sometimes a 'rule of thumb' is used. It says that the approximation of normal to binomial is 'reasonably' good if $n\theta$ and $n(1-\theta)$ both exceed 5. Few 'rules of thumb' are always accurate. There are better rules for normal/binomial fit, but this one is often quoted, probably because it is usually pretty good and it is easy to remember.

Any sum of a large number of identically distributed variables starts to look like a normal distribution; it's just that your first sample reached this approximation more quickly because it started out more "evenly". It's still discrete, though: the "convergence" that we are looking at does not refer to a convergence of density functions.

One reason is Stirling's formula.

Therefore, the first step of the proof is rewriting $\binom{n}{k}$ as factorials and approximating with Stirling's formula