My main question is - is there a way to characterize (instead of simply computing) for which values of $x$ (given $n,k,p,a$) the values of $f(x)$ will be odd numbers?

The first step seems to be answering the question of when ${\alpha \choose \beta}$ is odd and when it is even. This question was asked here and received a beautiful solution; however, I fail to see a way in which to apply that solution to "my" function.

This certainly is far from a complete answer, but I hope it's helpful. I'll try to describe my thought process so it doesn't seem like this came out of nowhere. 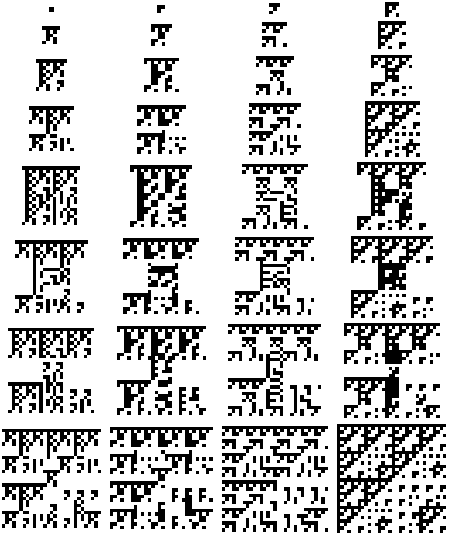 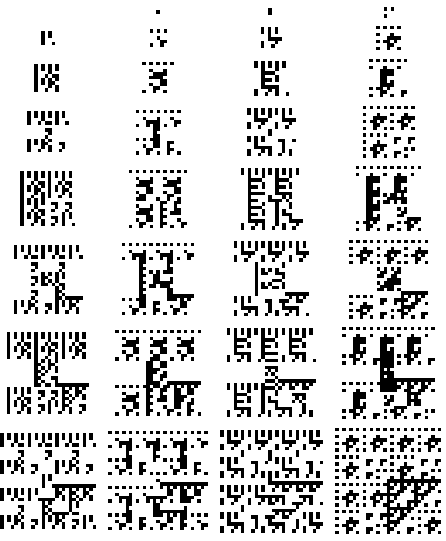 We have nice patterns when $n$ is one less than a power of $2$, especially in the top left portion of the tables (when $x+k\le n$) and for $a=0$ where it looks especially like the Sierpinski triangle or the Walsh matrix. In fact, upon inspection, your expression is a little weird for $x+k>n$ since then $n-x$ dips below $k$, but $k-t$ goes up to $k$. From now on I'll focus only on $a=0$ for $x+k\le n$.

For example, rotating the picture for $n=31$ gives us 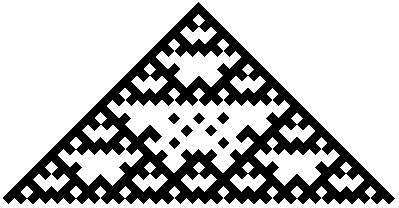 This looks nice and suggestive, but is perhaps a little wide. We can use hexagonally packed circles to view this a little better: 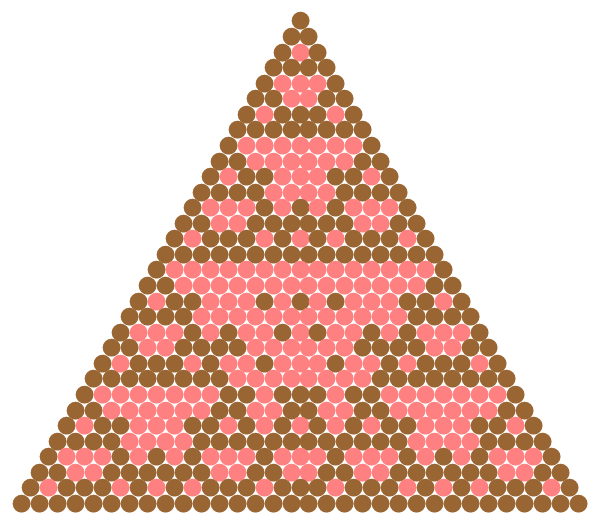 Now, in order to see a pattern, we can try to relate this to the $n=15$ case, which is precisely the top quarter of the whole image. 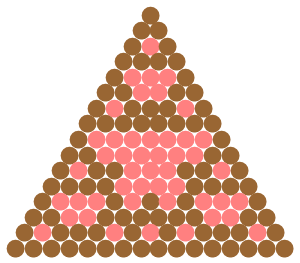 I thought to focus on the seven isolated 1s (brown dots) that appeared in $n=31$ "in" the large gap of $n=15$. Using different colors and some layer work in Gimp. 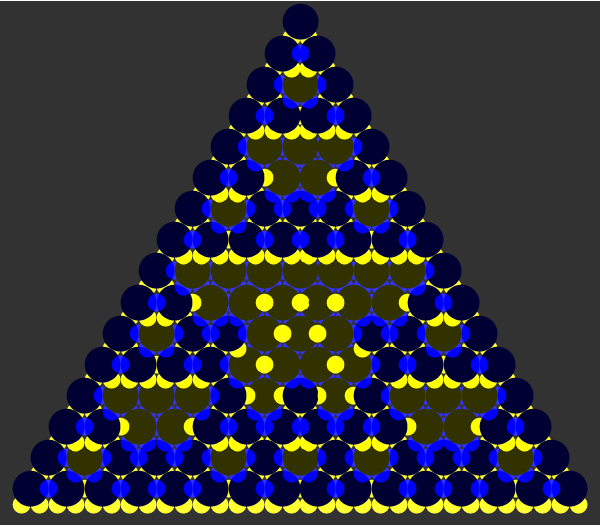 This picture is a bit hard to analyze, but basically, when you align things just right, the isolated 1s that appear out of nowhere are at the centers of $\lozenge$s with 0s at the vertices of $n=15$. In fact, the centers of all $\lozenge$s (not just vertical ones) appear to follow a simple rule: it's a $1$ if there are zero or two $\lozenge$-vertices that are $1$, and and it's a $0$ otherwise. The small points that lie under a large point (so that they're not the centers of a $\lozenge$) share the same value.

Unfortunately, this $\lozenge$-in-every-direction idea is a bit hard to work with, and leaves a problem for recursion at the bottom of the triangle. If we align things a bit more naturally, we get this: 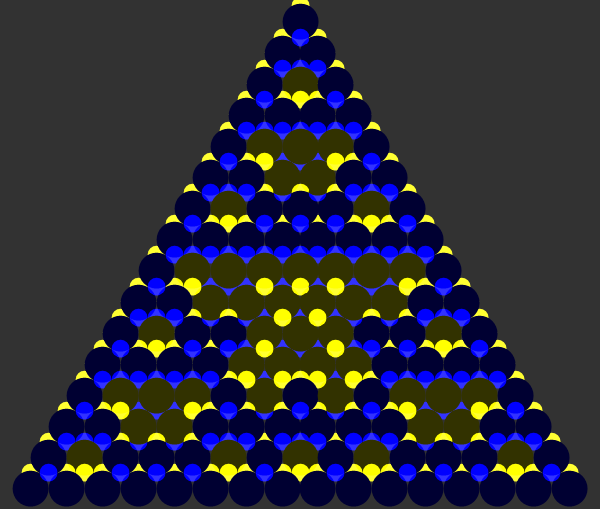 To connect this back to the original problem, $c=x+1$ (so $x=c-1$) and $r=x+k+1$ (so $k=r-c$). I admit I don't know how to begin solve this recurrence, and OEIS doesn't seem to shed any light on this (although it introduced me to the similar-looking Walsh matrix). I also have not proven that this works for all $n$ that are one less than a power of $2$. 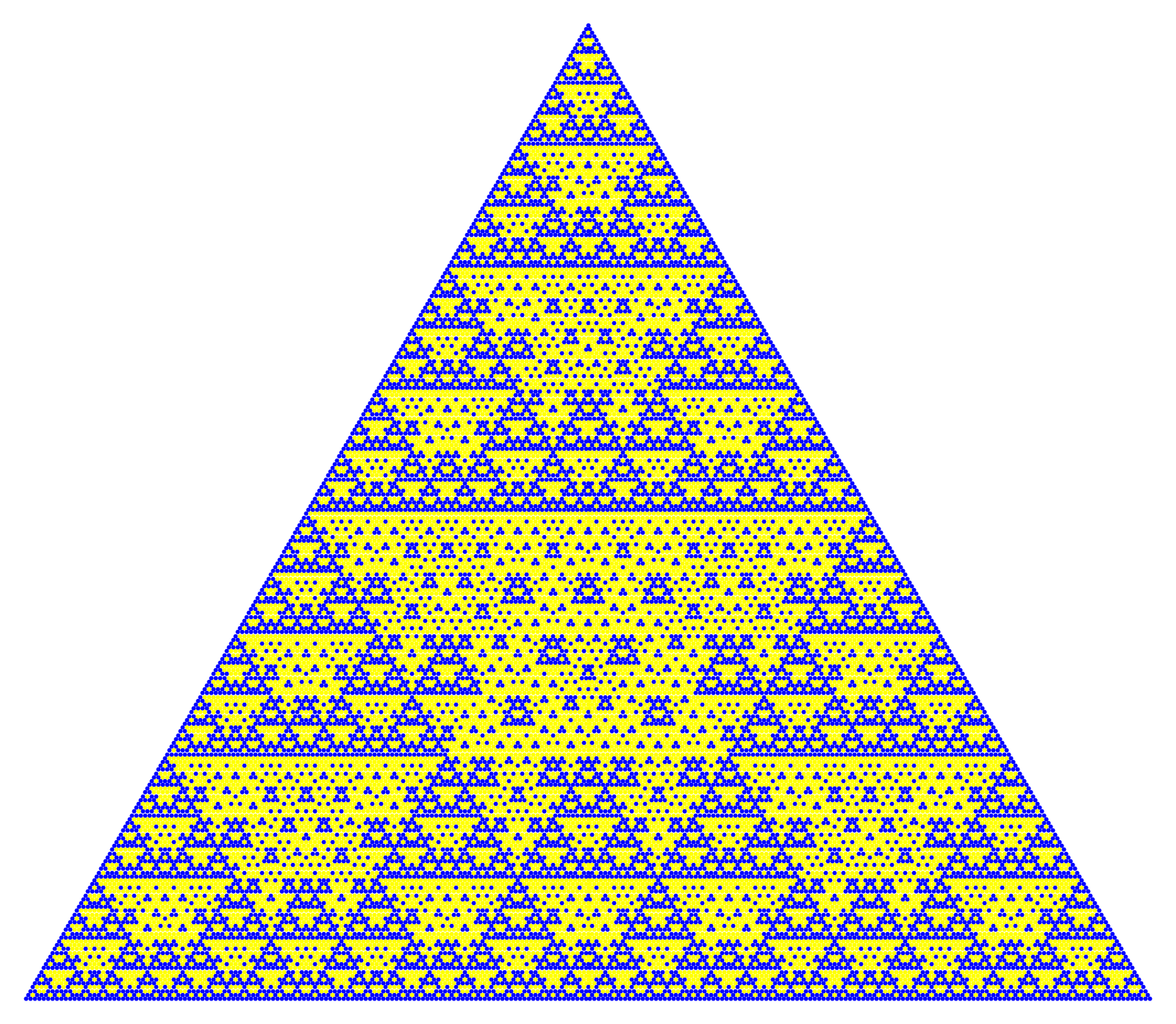 Not the answer you're looking for? Browse other questions tagged combinatorics number-theory binomial-coefficients parity or ask your own question.