What is the universal cover of the wedge sum of the torus and the real projective plane?

I know from Hatcher's Algebraic Topology that the universal cover of $\mathbb{R}P^2 \vee \mathbb{R}P^2 $ is an infinite number of spheres each one of them attached to two other spheres. I tried to mimic this construction somehow for this situation "gluing" together the universal covers of the torus and the projective plane and getting something like $\mathbb{R}^2$ with an infinite number of spheres attached but this doesn't seem to work.

How can I calculate the universal cover of this space?

The tree is a colored tree, with vertices colored by blue and red, each blue vertex adjacent only to red vertices and each red vertex adjacent only to blue vertices. Neighborhood of a red vertex consist of $\Bbb Z/2$-many vertices and neighborhood of a blue vertex consist of $\Bbb Z^2$-many vertices. This is because the wedge point $x$ in $\Bbb{RP}^2 \vee T^2$ lifts to $\Bbb Z/2$-many points in each $S^2$, and $\Bbb Z^2$-many points in each $\Bbb R^2$. Replacing each red vertex by an $S^2$, each blue vertex by an $\Bbb R^2$ and each edge by one-point union of the two vertex spaces gives me the desired universal cover. 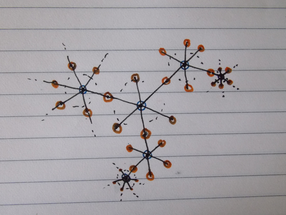 $\text{Remark}$: The reason that you get a much nicer thing for $\Bbb{RP}^2 \vee \Bbb{RP}^2$ is that your tree consists of vertices corresponding only to $S^2$ and the wedge point lifts only to 2 points in each $S^2$. This implies for every $S^2$-vertex, there are only two $S^2$-vertices adjacent to it in the graph, so globally it looks like an infinite string of $S^2$'s, each two of them touching at a point. Note that the graph is still a tree, with each vertex being of valence $2$. 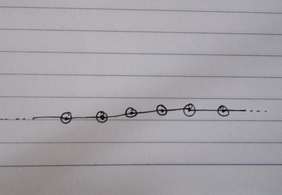 Not the answer you're looking for? Browse other questions tagged algebraic-topology covering-spaces or ask your own question.