Apologies if math stackexchange is the wrong place to post this, I'm stuck on a differential equations/physics problem in a DE textbook.

An object of mass $m$ is attached to the midpoint of a light elastic string of natural length $6a$. When the ends of the string are fixed at the same level a distance $6a$ apart and the mass is allowed to hang in equilibrium, the length of the stretched string is $10a$. The mass is pulled down a small vertical distance from equilibrium and released.

I'm in a rather sad state. I've never taken physics in my life, and I'm trying to learn. But I don't really get what the question is asking, it seems too vague. I think we can relate this problem to a problem about springs: it seems like we could draw an imaginary vertical line from the object up to the imaginary horizontal line connecting the endpoints of the string (the horizontal line is where the string would be if there were no object attached to it and pulling it down), and that imaginary vertical line is basically a spring, subject to Hooke's law and whatnot.

What does "small oscillations" mean anyway? Does that mean that $y$ begins with some small initial velocity? Or that $F(t)$ is some function which takes on small values? So confused right meow.

This is a very easy problem. In this case, the oscillator does not have damping, and it is not driven. So the Differential equation will be of the form

Small oscillations means that Hooke's Law $F=−kx$ is valid. In case of pendulums, it means that the angle is small and you can take $\sinθ≈θ$.

In this case to find $\omega$, you should draw a diagram, write all the forces, and apply Newton's second law, $F=ma$. I highly recommend you to watch Walter Lewin's lectures for understanding this.

E.g. see this diagram, Black is the actual potential while red is the quadratic approximation. So this system will behave approximately like the harmonic oscillator. 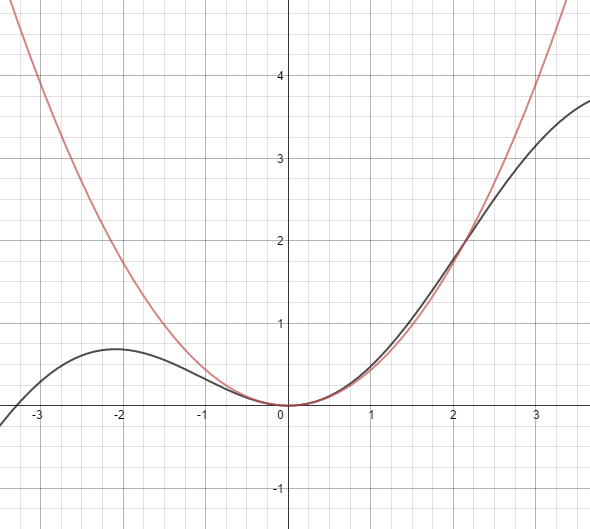 So general meaning of small oscillation is that the amplitude is not large and you can take the system to be a harmonic oscillator.

Not the answer you're looking for? Browse other questions tagged ordinary-differential-equations physics or ask your own question.