Can one construct a “Cayley diagram” that lacks only an inverse?

My group theory text asks for an example of a Cayley-like diagram that exhibits all the properties of a group except (only) that at least some elements lack an inverse. Is it possible to construct such a diagram?

Nathan Carter p. 24 Question 2.15. in Visual Group Theory (in the context of this question) defines a group as a "collection of actions" that satisfies four rules:

Clearly (2) will be violated in any diagram that is constructed by adding new node, $n$, to the diagram for a group $G$ by one-way arrows for each of the generators in $G$, since it provides no way to reach $n$ from any other nodes, so that paths starting at $n$ (only) cannot be reversed. This will be the case regardless of what nodes in $G$ each of the arrows from $n$ lead to. For example, starting with $G=D_4$: 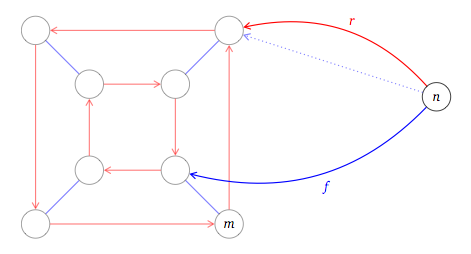 EDIT: As discussed below, this figure does not, in fact, violate (3): the $r^{-1}$ mentioned above (the one starting at $n$) does not exist. Also, it does matter where the arrows from $n$ are connected: they must be connected to $G$ in a way that follows $G$'s rules. In the diagram above, for example, if the dotted path had been chosen for $f$ instead of the one indicated, the diagram would violate (3). Rule (3) will always be satisfied in a diagram where the connections from the added node replicate outgoing connections from a node in $G$ (here $m$).

...cannot have two arrows of the same type pointing to the same destination from two different sources.

However, while this is certainly a property of (all?) diagrams (including the one above) that violate (2), it is not sufficient to violate (2), and can result in the violation of other rules instead. For example simply "rewiring" one of the cyclic actions in $D_4$ so that it points "to the same destination from two different sources" can produce a diagram that satisfies, (2) but violates (3): 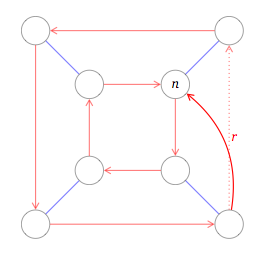 Edit: To construct such a diagram, we can consider the multiplication table of $\mathbb{Z}_n$ for any $n>1$. (Considering $\mathbb{Z}_n$ as an additive group, of course.)

Consider in particular $\Bbb Z_4$. A Cayley diagram corresponding to it as an additive group would be: 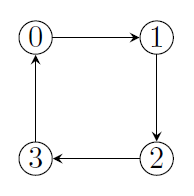 Above, the arrows clearly indicate the action of addition by $1,$ modulo $4$, which generates the group. However, the diagram for multiplication would be: 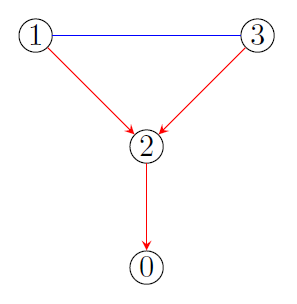 Now, this diagram violates reversibility in two ways, since there's no way back from $0$, at all, and there is no way to get from $2$ back to either $1$ or $3$. (The corresponding diagram for $\Bbb Z_n$ violates reversibility in exactly one way if and only if $n$ is prime.) This does not, however, violate determinism, as a perusing of Carter $\S1.2,$ pages $4-5$ shows. To elucidate this further, consider the following example, which (arguably) violates only determinism.

Suppose we have a thin metal disk with rounded edges (such that it cannot balance on edge), one black face, and one white face. We will put this disk in a large, flat, circular area with up-curved edges (like a large, flat-bottomed bowl), so that it can't escape or fetch up against a wall. Our generating action is to put the disk on edge in the center of the area and spin it until it comes to rest again. The available states are black-side-up and white-side-up. This yields the following Cayley-like diagram:

Note in particular that for every instance of the action, there is a chance of remaining in the pre-spin state or switching states--in this uncertainty, determinism is violated. However, due to our construction, no matter how many times we spin it, there are no other states in which the disk can be, so any sequence of consecutive actions is again an action. The finicky part is reversibility. The argument is that the disk will eventually switch sides with probability $1,$ which (in real-world terms) means we'll always return to a previous state, if we simply act sufficiently-many times.

The situation is, of course, rather contrived (and arguably doesn't really work), but the Cayley-like diagram shows what happens when determinism fails: there is at least one action that "branches" at at least one node. This doesn't happen with multiplication in $\Bbb Z_4$, and so determinism is not violated in that case.

Not the answer you're looking for? Browse other questions tagged group-theory visualization or ask your own question.

52
Introductory Group theory textbook
2
Is the “binary operation” in the definition of a group always deterministic?

1
Prove that the group of automorphisms of a labelled Cayley graph of a group G is the group G itself (Just stumped on one direction)
2
Combining symmetries into a group action
4
right group action
3
With the branching rules of subalgebra, how can I write down explicit matrix elements for a representation?
2
Connections and Differences between these Cayley Diagrams for $A_4$ and $S_4$ - Carter pp. 80, 82
1
Visualize left, right cosets and conjugation
22
Can a group have a subset that is stable under all automorphisms, but not under inverse?
3
Criteria of regularity that a Cayley's Diagram should meet .
1
Visualizing Normal Subgroups