First there was this question:

And the obvious solution was to find

The sum of multiples individually checked in 1, 2, 3, and 4 will give the answer

But then came this question

Example question by the author, followed by the first question 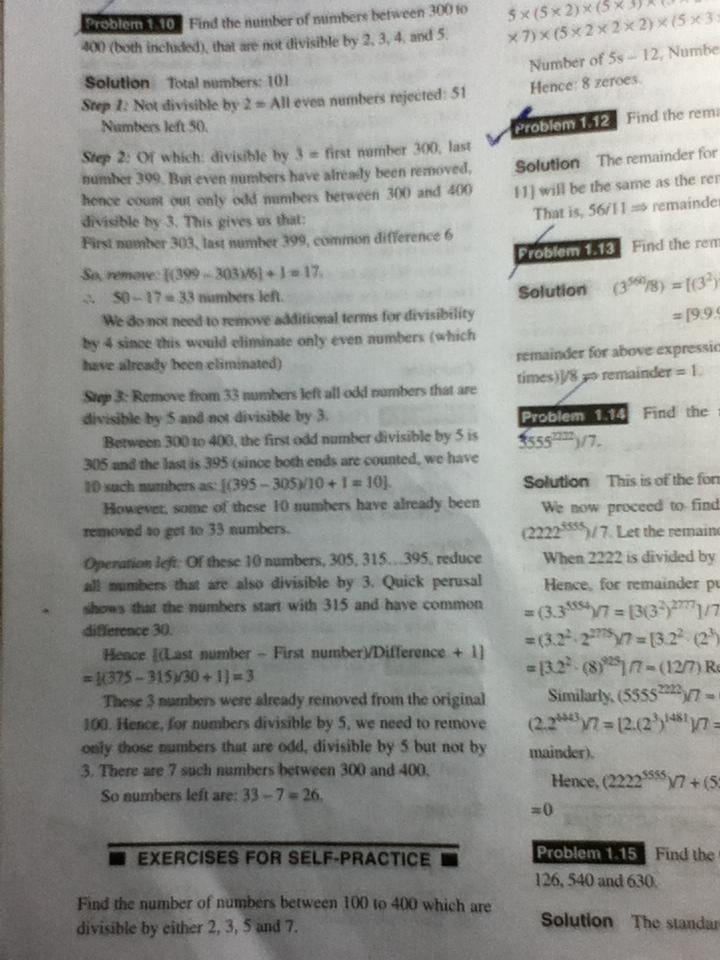 This question shows clearly why English is not the best language for mathematics. (French, for instance, is much superior.) I’m a native speaker of the language, and for the life of me, I’m not sure which meaning in the original question is which. A far better way of posing the question would have been “find the numbers divisible by precisely one of 2, 3, 5, and 7”; and “find the numbers divisible by at least one of 2, 3, 5, and 7”.

Another lesson to take from this conundrum is that no matter how clearly you think you’re posing a mathematical question or giving a mathematical explanation, there’ll be someone who misunderstands. Remember too that the author of a text is a fallible human being, often even more fallible than you.

The word "either" typically denotes exclusivity of a logical disjunction. In other words, given statements $x_1,...,x_n$, the following are equivalent:

Unfortunately, the word "either" is often misused, even by people (e.g.: English-speaking mathematicians) who really ought to know better! Some use it simply as a lead-off word for a list of options, and in that case, it is effectively a throwaway word, meaning nothing at all, and so allowing that any non-null subcollection of the list of statements may hold simultaneously.

As a further complication, the phrase "any one of" seems to carry with it the connotation of "exactly one of"! It would be better to say "any of" instead--as that suggests that more than one may hold, but at least one must hold--but again, this is a common error, even among those who should know better.

Ultimately, this is just a frustrating reality. The best advice I can offer is to try to determine which meaning is intended by the questioner. If it is a textbook, try to find an early example where "either" is used, and see if it means "exactly" or if it is a throwaway. Likewise with "any one of". It is probable that they are intended to have different meanings, so if one is exclusive, then the other is almost surely inclusive.

Edit: Based on what you've told me, it looks as though the author is using "either" as a throwaway word, which suggests that "any one of" is intended to mean "exactly one of" in this text.

Your approach to the first problem is then the right one to take. I am going to break things down as follows, to give a slightly more general approach that should help out in both problems and more, if you're familiar with the basic concepts of set theory (specifically: union, intersection, complement, universe of discourse) and how we may use venn diagrams to help sort out the elements (or cardinalities of sets) of a universe of discourse. 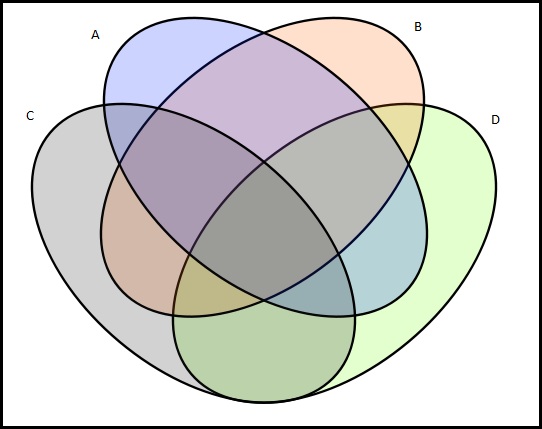 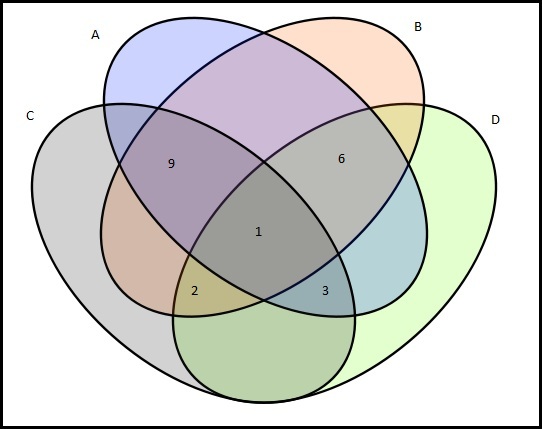 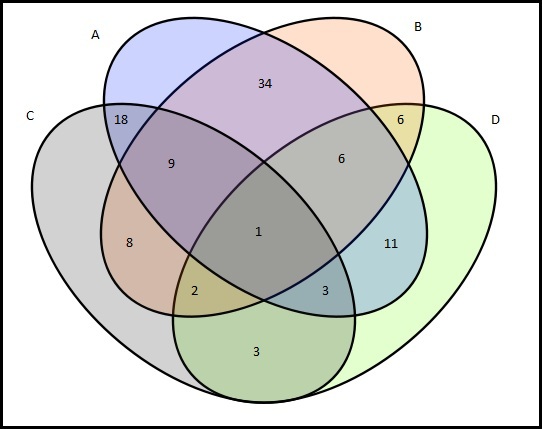 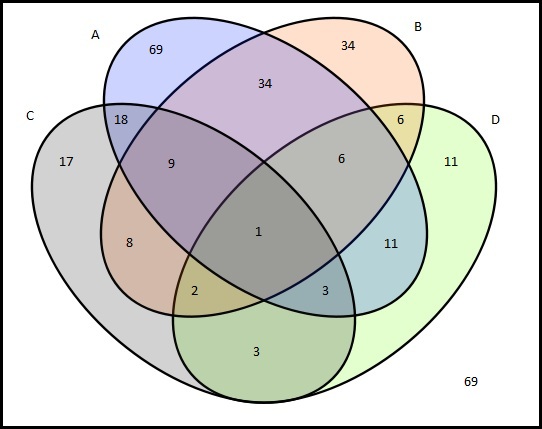 While time-consuming, the advantage of proceeding as above is that, at this point, you can answer any question along this line, since everything is nicely sorted out.

I know that there is going to be some disagreements on this, but based on the answer to this question on English.SE, I would say that

to mean the number of numbers between 100 and 400 such that the number is divisible by either 2, 3, 5, or 7. The either ... and seems to be a typo. Anyway, the or usually means in math that you can have one or some, but since we have either, then maybe the best way to read this is and an exclusive or. So you would not count $102$ in the list of numbers since it is divisible by both $2$ and $3$

NOTE: I know that this is probably not the "correct answer" in the book. At the end of the day, the author has made some mistakes. So I would agree with Cameron when he in his answer says that you probably want to read through the book and see if you can figure out what the author means when he uses for example "either ... or".

Mathematically, if we let $S_{n}$ be the set of numbers between 100 and 400 which are divisible by n, then we can write the first question as:

Whilst the second question can be written as:

In algorithmic terms, to get the answer to the questions, you would compute the size of the set of numbers divisible by $2$ or $3$ or $5$ or $7$ as you did, to get the answer to the first question. The second question can be found simply by testing if each number is a multiple of only $2$ or $3$ or $5$ or $7$, if it is, then add one to your count; this will give you the correct answers.

However, the challenge to interpret the second differently would probably be answered by figuring out how many numbers in this range are divisible by 2, 3, 5, and 7--no matter which you choose. Because all four of these divisors are prime numbers, the answer is just one: the product of 2 times 3 times 5 times 7, or 210. There is no smaller number, and the next in the series would be 420, beyond the 100-400 range.

All in all, a nice pair of exercises, despite the linguistic difficulties.

2
How many prime numbers are also triangular numbers?
11
Is the hypotenuse of a triangle ever divisible by three (for primitive Pythagorean triples)?
6
The Remainder of $\frac{2000!}{5^{397}}$ (Just Checking my theory)
7
Combinations of four consecutive primes in the form $10n+1,10n+3,10n+7,10n+9$
2
Prime number search
1
Smallest odd-deficient odd number and its family.
0
Prime number circle distribution
0
Does a function exist that maps the natural numbers to the natural numbers excluding multiples of 2 and 3 and starting at an arbitrary point?
2
If p, q, r are distinct primes, does there exist infinitely many (p, q, r) such that p^q+q^r+r^p is prime?