What is the best book for studying discrete mathematics?

Concrete Mathematics: A Foundation for Computer Science, By Donald Knuth himself! 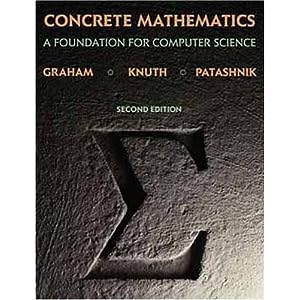 Discrete Math knowledge is needed to become adept in proving the correctness and deriving the complexity of algorithms and data structures. You will be taught those in Algo/DS books, but you can only get the mathematical proficiency by practicing just discrete math.

Knuth book is very good for that. But IMHO, you will only need it if you for doing advanced proofs in DS/Algorithms.

For a beginner, it would be great to go over "Grimaldi" http://www.amazon.com/Discrete-Combinatorial-Mathematics-Applied-Introduction/dp/0201199122 and then quickly move to Algorithms.

Otherwise, you will continue going deep in Discrete Math and never get to Algorithms/DS.

Remember, Discrete Math does not teach you how to design algorithms or Data structures. That will come only by practicing Algorithm problems @ topcoder, acm icpc , spoj etc and reading books on Algos/DS or courses on those.

A very good textbook for discrete mathematics at an undergraduate level is the Kenneth Rosen book titled Discrete Mathematics and Its Applications.

The book provides solutions to half of the problems. You can also buy the Student's Solutions Guide. I don't own it, but I would suspect that it either provides the answers to the other half of the questions or provides a step-by-step guide to solving the problems (the book only provides final answers with minimal explanations of those answers).

It's used for the two-quarter sequence in Discrete Mathematics that is taken by computer science and software engineering majors, as well as a number of mathematics programs at my university. I kept this book around even after I took the course, and I'm currently using it to brush up on my discrete math skills for my Certified Software Development Associate exam.

Theres many different areas to discrete math, and many good books.

theres Graph Theory by Diestel, which has a free pdf version available at

Other books that are good include Enumerative combinatorics 1 and 2 by Richard P Stanley (a book which is sufficiently dense that having at least 1 analysis and algebra course each will help).

that being said, for more introductory expositions in terms of expected mathematical maturity, I'd suggest googling around and looking at various lecture notes of the "intro to combinatorics" or "mathematics for computer scientists" sorts. I found that MIT OCW's "mathematics for Computer Scientists" notes were quite nice when I looked at them several years ago.

has a link to the lecture notes. There are some really funny asides in it. One of my favorites "... anyone who says that is wrong, and you should make fun of them until they cry".

Also, If you want to dig even deeper into discrete math/ combinatorics, the value of building up a wee bit of mathematical basics in other areas of math. Complex Analysis, real analysis (at the level of at least baby rudin, and perhaps even up to functional analysis), maybe some probability up to its measure theory formulation level, and at least a smidge of abstract algebra. Then you can do stuff like look at the combinatorics of random processes (great for analyzing randomized algorithms) and look at cool problems like percolation.

theres probably other things I should suggest, but the point is discrete math is accessible without that much of a background, but is also rewards you for enriching that mathematics background with some amazingly beautiful stuff thats 1) awesome and fun 2) useful.

I very much like Norman Biggs' Discrete Mathematics. I would not recommend the second edition. Rather, get the first edition (the "revised" first edition if you can). The text claims to be self-contained (seems so to me).

Since there is not much info on this edition of the text online (the preview on Amazon is the second edition), here is an outline:

I really like Discrete Mathematics by Ross and Wright: 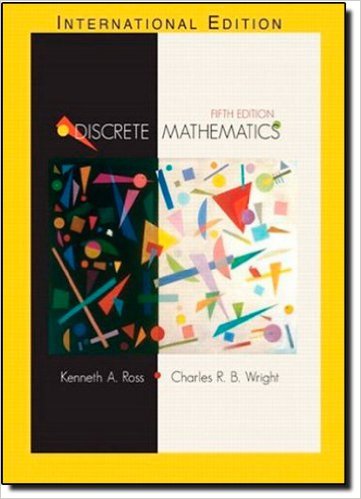 It is at a very basic level and is great if you are looking for an introduction into discrete mathematics.

The best book as far as i know are these two:

Discrete Mathematics and Its Applications by Kenneth H. Rosen

Fundamentals of Discrete mathematical structures, 3rd Edition. It is written as per ACM-Curriculum, comprises lot of GATE level questions, and written by a Computer science Professor.

Not the answer you're looking for? Browse other questions tagged discrete-mathematics reference-request big-list book-recommendation or ask your own question.