About character table of S3

Could anyone please explain how the character table (of conjugacy classes as column and irreducible representations as rows) gives information about the group? I want to understand this by applying on the symmetry group S3 please.

This is a sort of big question. I suggest you look at Fulton and Harris or Serre's book for some of the general theory. I'll work out the character table and stating what we need as we go, but you should look up and try to understand the proofs. I'll assume that you're talking about complex reps, since these are generally where you start.

Let $\phi: G \rightarrow GL(V)$ be a representation of G. Recall that a character $\chi_V: G\rightarrow \Bbb C$ is defined by $\chi_V(g) := Tr(\phi(g))$. Remember from linear algebra that the trace similar matrices is the same, so $\chi_V$ is a class function, that is, it is constant on each conjugacy class of G.

We need to find three irreducible representations. These are representations that do not have any non-trival subspace that is invariant under the action of $S_3$. The trial representation $\Bbb 1$ is the representation corresponding to the homomorphism sending every $ g \in G$ to the identity $i : V \rightarrow V$. Clearly the trace of this is one for each conjugacy class, so the first row of your table has all one's across it.

The alternating representation exists for every symmetric group. It's defined by $g \centerdot v := sgn(g)v$. Check that this is a representation, and note that it's one dimensional. All one dimension reps are irreducible (why?). The character of this is pretty clearly $1, -1, 1$ in the second row when you order your columns by cycle length.

For the third one, we can't get away so easily, and we have to actually use properties of characters. As a numerical consequence of the fact that the characters form an orthonormal basis of the space $\Bbb C_{Class}(G)$ of class functions on $G$, the sum of the squares of the dimensions of all irreducible reps is the order of the group. Let V be the missing rep. We have $6 = 1 + 1 + {dim V}^2$, so $dimV = 2$. From linear algebra, we can see that the character on the identity element is the dimension of the space corresponding to the character. In our third row and first column we have a 2. You can use other numerical properties of the character to finish the table; the last two entries are 0 and -1. Use the fact that $0 =\sum_V dim(V_ \;) \centerdot\chi_V(g)$, where $V$ runs over the 3 irreps and $g \neq e$ is fixed.

Fulton and Harris have a nice way of doing this, using what the call "the original fixed point formula" and yet another using a slightly more "ad-hoc" approach. The first two chapters of their book are really readable.

I appreciate this, but actually I know how to build the character table of S3, but I want to know how dose this table give information about S3? for example the following properties: 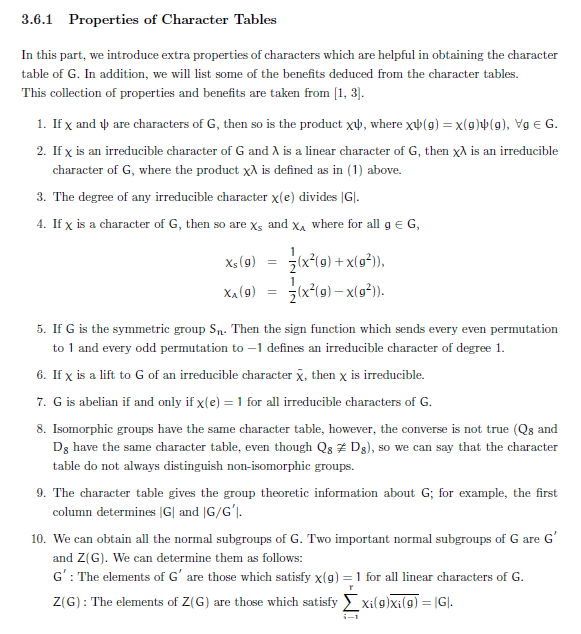 There are plenty of applications. From the top of my mind, for a given group, with the character table you can find all the normal subgroups of a group.

How to find normal subgroups from a character table?

One application I personally used was through Mackey Decomposition, you can calculate whether a certain type of intersection of maximal subgroups exist. It is in length covered in an old paper but the paper in particular is a bit hard to read due to notation.

I am sure more experienced users can come up with much more. You probably also can find more applications in this webpage.

Not the answer you're looking for? Browse other questions tagged representation-theory or ask your own question.

6
How to find normal subgroups from a character table?