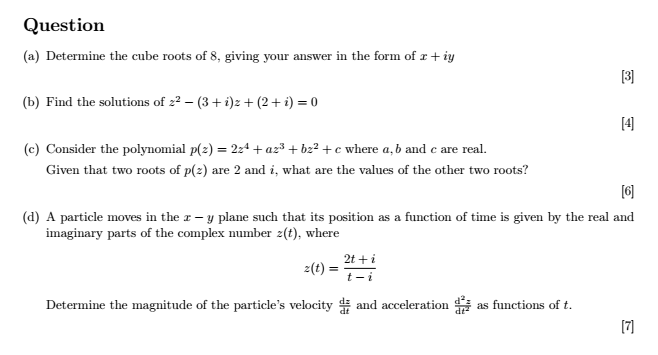 Problem above. (Sorry I can't embed yet and the link seems to be removed when hyperlinked)

Fairly simple (I imagine) question that I am stuck on. The first two parts are fairly straightforward, however I am unsure on how to continue beyond that.

How does one find the roots given two roots? I've tried long dividing and resulted in nothing useful; any clever ideas?

Also for the final part, would the velocity merely be z'(t) and acceleration z''(t)? (after taking the complex conjugate of the denominator to turn it real)

Seems too easy to be the most numerously marked question, hence I feel like something is probably going wrong. Would I take the real parts of the velocity/acceleration after finding z' and z'' to find the magnitude? Or would it be a case of just finding the magnitude in the same sense as you would of an argand diagram (root of [x^2 + y^2]) simply with the variable t in place?

For part (c), keep in mind that in a polynomial equation with real coefficients, if $z$ is a root, so is $\overline{z}$, i.e. its conjugate. That allows you to immediately deduce that $-i$ is a root as well.

Now apply Remainder theorem using the three roots you've found. You'll have $3$ simultaneous equations that allow you to determine the coefficients. You can now use long division by the product of the known factors to determine the last factor (and hence last root).

EDIT: that's the general method. However, in this specific problem you'll find it's even easier as either of two of the equations you derive will allow you to immediately deduce that $a=0$, making the original equation a biquadratic quartic, allowing a very quick solution using the quadratic formula.

For part (d), you differentiate to find $z'(t)$ and $z''(t)$ and then find the magnitude by squaring the real and imaginary parts of the expression, adding them together, then taking the square root.

Not the answer you're looking for? Browse other questions tagged polynomials complex-numbers or ask your own question.