I'm trying to find the Möbius transform that maps the circles in the image below ($|z| = 6$, and $|z- 4.5i| = 1.5$) to concentric circles. Comparing with a similar problem where the circles lie on the real axis, I came up with: 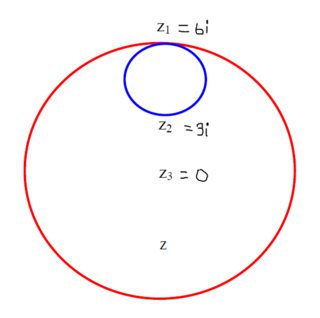 If $w = \dfrac{z}{z-6i}$ then $w=\infty$ when $z=6i$, since you get $0$ in the denominator and something else in the numerator. If a Möbius transformation maps one point on a circle to $\infty$, then it maps the circle to a straight line. Since that point is on both circles, they both get transformed to straight lines. The two circles don't meet except at $6i$; therefore the two lines don't meet except at $\infty$, so they are parallel. If you find the images of two points on each circle other than the point that gets mapped to $\infty$, then you'll know exactly which two straight lines they are.

It's impossible to map circles that have a common point to circles that don't. You can map them to parallel lines, which is what your map does. Indeed, sending $6i$ to $\infty$, you mapped any circle passing through $6i$ to a line.

Thus, both circles are mapped to vertical lines. To find exactly what they are, pick a point on each: where does $3i$ go, where does $-6i$ go...

Not the answer you're looking for? Browse other questions tagged complex-analysis conformal-geometry mobius-transformation or ask your own question.